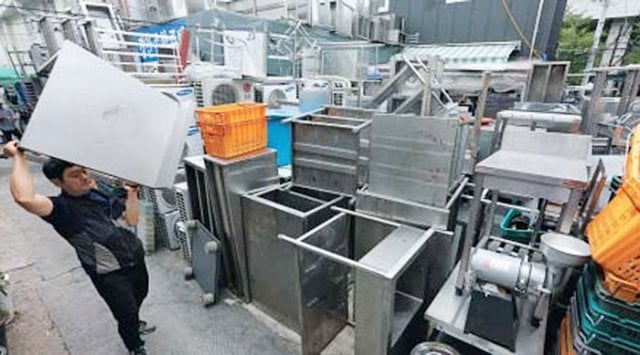 Kitchen appliances from closed restaurants are piled up at a second-hand shop in Seoul on Tuesday.

Small businesses have suffered more than a 10-percent decline in sales so far this year compared to the same period of 2017.

This is due to a chronic slowdown in private consumption compounded by declining export growth.

The situation is particularly difficult for small shops and service businesses, which complain that conditions are even worse than in the aftermath of the 1997 Asian financial crisis as the decline is being compounded by the minimum wage hike.

Jung Yeon-sung at Dankook University said these businesses are experiencing an even more acute drop in revenues than the average decline suggests.

The data were compiled from the seven business sectors most small enterprises belong to including retail, accommodation, food and private education.

The revenues were tallied by data from credit card companies and represent more than 80 percent of small businesses with fewer than 10 staff in the country, the majority of which are sole proprietorships.

As household debt swells to approach a record W1,500 trillion, customers are tightening their purse strings. Noh Min-sun, a researcher at the Korea Small Business Institute, said, "Looking at how steep the rate of decline was, we can see that consumers are cutting back on spending on unnecessary things to pay interest on housing loans and other obligations".

"Small Businesses Hit Hard by Slow Economy"
by HanCinema is licensed under a Creative Commons Attribution-Share Alike 3.0 Unported License.
Based on a work from this source