Smoking to be banned along Gangnam Street 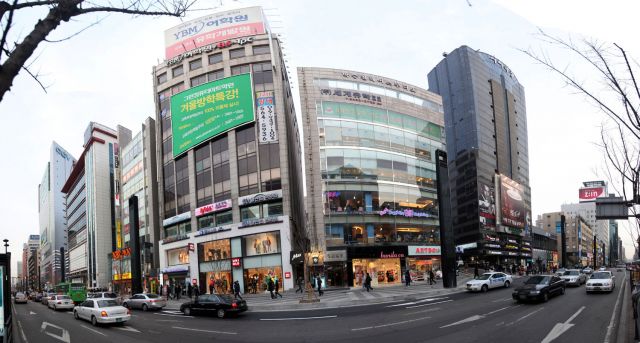 The local district office governing part of Gangnam Street, southern Seoul, announced Monday that its side of the thoroughfare will become smoke-free from June, with violators being fined 50,000 won.

This is the first time for a local authority to ban smoking in a whole street and collect fines, and is drawing mixed reactions from citizens. Previously, some local governments have designated no-smoking zones in public but couldn't enforce the ordinance due to a lack of related regulations.

Seocho District said Monday that it will ban smoking on the 934-meter pedestrian road between Exit 9 of Gangnam Station on subway line No. 2 and Exit 6 of Sinnonhyeon Station on line No. 9, as part of efforts to protect people from secondhand smoking.

"The avenue is Seoul's most crowded street, with a floating population of 113,600 a day. We've received many complaints from citizens who were displeased with the amount of smoking there", an official of the district office said.

"Gangnam Station is also a unique district, as a large-scale residential area with schools is located just behind the nation's most-visited entertainment area. Residents and students need to come to the main street when they take the subway or buses, and face damage from secondhand smoking", she said.

Along with the Gangnam Station area, the 450-meter street between Exit 12 of Yangjae Station of line No. 3 and the EL Tower will also become smoke-free.

Those smoking on the two districts will be fined starting June after a three-month grace period.

For smokers, the office will prepare a smoking zone, although it hasn't decided where and how large it will be, according to the official.

Seocho revised its ordinance last July for the measure, and many of Seoul's other 24 districts have done so and plan to designate smoke-free zones, she said. The move follows the revised National Health Promotion Law, which allows local authority heads to set up no-smoking areas and collect fines.

Non-smokers welcomed the measure. "While walking on the street, I don't like ash and smoke floating at me when a smoking person walks in front of me. I support the ban", a 24-year-old university student, Park Jin-seok, said.

A 32-year-old smoker Kim who works at an office near Gangnam Station said, "As a smoker, the ban may be annoying. But I myself don't like the smell of smoke from other smokers, so I understand why they are making the rule".

But some were skeptical of the rule's effectiveness, as the smoking ban is applied only to the roadside facing the main street, not alleys in the back, and smoking is available on the other side of the avenue that belongs to Gangnam District. "Many smokers will go to the back alleys or the other side of the street to smoke", Kim said.

The official said they haven't discussed it with Gangnam District because it has its own schedule and plan on smoke-free zones.

"It's a matter of manners. Many smokers think smoking on the street doesn't bother others much because a street is an open area, while it actually does. The ban will be like a campaign to make people rethink about public smoking", she said.

"Smoking to be banned along Gangnam Street"
by HanCinema is licensed under a Creative Commons Attribution-Share Alike 3.0 Unported License.
Based on a work from this source