So Ji-sub and Yoo Ah-in boxing... who's better? 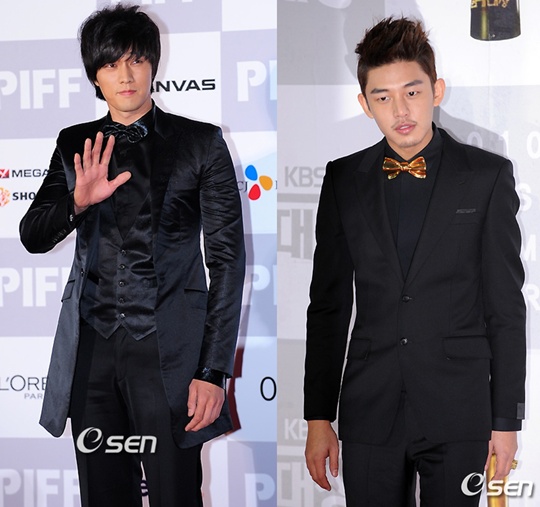 Actors So Ji-sub and Yoo Ah-in ar absorbed in boxing.

So Ji-sub is currently preparing for the lead role of the movie "Always". This movie is a heartwarming and affectionate sad love story about an ex-boxer who has a strong will to survive and a blind woman.

So Ji-sub, who is the ex-boxer, is practicing boxing for the movie. His management said, "He is working hard with his boxing coach every chance he can. He is looking forward to the shoot in March so he's analyzing his part as well as building his body".

Movie "Only You- Movie" is the new project of director Song Il-gon who has done "Flower Island" and "Spider Forest".

Yoo Ah-in is looking forward to shooting the movie "Punch" with Kim Yun-seok. Based on a best selling novel, this movie is about the growth process of seventeen-year old Punch, who is poor, not that smart and a rebel but doesn't lose in a fight with anyone. He meets his sworn enemy teacher oddball Dong-joo who slowly changes to a lovable enemy and Punch gets a dream and hope as he learns kickboxing.

Yoo Ah-in in the movie is Punch, the poor rebel. As much as his role is about learning and maturing through kickboxing, he is working hard at training himself.

Recently Yoo Ah-in uploaded a video of him practicing on Twitter. In the video, he was charismatic, swift and fast.

"So Ji-sub and Yoo Ah-in boxing... who's better?"
by HanCinema is licensed under a Creative Commons Attribution-Share Alike 3.0 Unported License.
Based on a work from this source