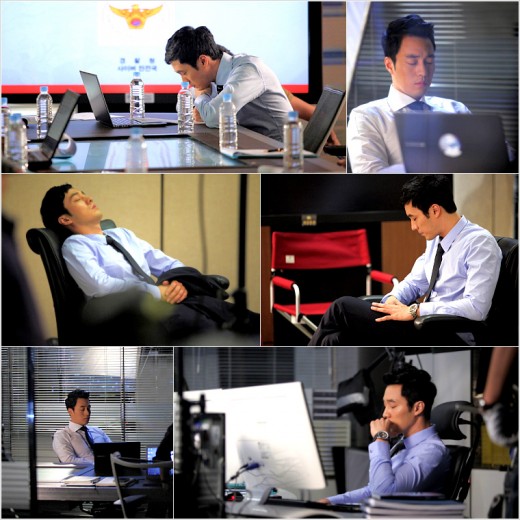 A still cut of the actor So Ji-sub who is in the current SBS TV drama "Ghost - Drama", dozing off during breaks has been revealed.

In the picture revealed on the 11th, So Ji-sub is sleeping in between breaks to not waste time sleeping for a better quality of the drama.

While he is carrying out murderous filming schedules, unlike the energetic man we see in the dramas, So Ji-sub is actually fighting with sleep on set.

While the camera isn't running, So Ji-sub is on his chest on a table and napping while reading his script or sleeping while sitting straight up on a chair. He is also sleeping on a sofa outside while the schedule has been delayed.

So Ji-sub's spends most of his time on the drama set and the few minutes he sleeps whenever he can and while traveling from location to location is all he can get. So if there is anyplace he can get some Z's he is caught with his eyes closed.

Meanwhile, at the end of the twelfth episode, Jae-hee (Jung Moon-sung) who was abandoned by Hyeon-min (Uhm Ki-joon) was threatened of his life by someone while being questioned by the police. Ki-yeong (So Ji-sub), Hyeok-joo (Kwak Do-won) and Kang-mi (Lee Yeon-hee) ran over to save him but he was already dead. While the key witness out of all powers behind the dark has been killed, what will Ki-yeong do to get through this?

"So Ji-sub caught napping "I'm so sleepy""
by HanCinema is licensed under a Creative Commons Attribution-Share Alike 3.0 Unported License.
Based on a work from this source