So Ji-sub in Tokyo for 1st Japan Drama 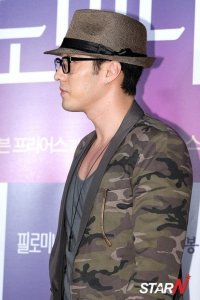 A preview for a Japanese drama starring hallyu (Korean wave) star So Ji-sub will take place in Tokyo next week.

The show, "I am GHOST", will be featured on BEE TV, a mobile phone broadcaster, starting Oct. 20. The preview will be held at the Tokyo International Forum Hall in Yurakucho, Oct. 13.

So, 32, who plays heroine Mitsuki Tanimura, director Toshiro Sonoda and other staff members will give a full account of the filming process during the preview, according to Yonhap News.

The drama tells the Sad Love Story of a young girl (Mitsuki Tanimura) who contemplates suicide, and a wounded ghost (So Ji-sub).

So Ji-sub debuted as a model for a clothing company in 1995. Two year later, he made his television acting debut in the SBS drama "Models". He gained fame in 2004 when the KBS drama "Sorry, I Love You", co-starring actress Im Soo-jung, became a smash hit.