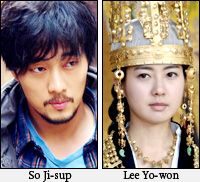 Korean heartthrob So Ji-sub and starlet Lee Yo-won have been selected by camera directors as the best actor and actress in the "2009 Grimme Awards", the Korean Television Directors of Photography Association said, Thursday.

So was acknowledged for his starring role in the SBS TV's hit drama "Cain and Abel", while Lee won for her title role in MBC TV's mega-hit epic drama "Queen Seon-deok".

The grand prize of the Grimme Awards also went to the two directors of "Queen Seon-deok".

The awards ceremony will take place in a broadcasting association building in Mokdong, Seoul, Friday.