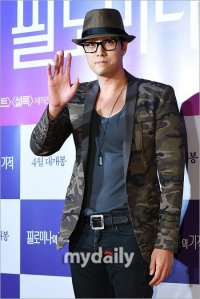 Actor So Ji-sub, who surprised many by choosing the low-budget film "Rough Cut" to mark his screen return after completing his compulsory military service in April 2007, has made another unexpected decision -- to make his Chinese film debut in a movie called "Sophie's Revenge", starring Zhang Ziyi in her first romantic comedy. The film opens in Korea on Thursday.

In a press conference last Thursday, So explained why he chose this particular film. "I wanted to do a bright and cheery role because I've played so many sad and gloomy ones". So's part in the film was originally meant to be just a cameo, but as shooting progressed his role gained more and more importance. Even so, his fans might be disappointed by his limited time onscreen. But So was more concerned with "how I could harmonize my performance with those of the other top Chinese actors and actresses". Another challenge was delivering his lines in 100 percent Chinese. "I really struggled throughout the shoot. I made so many errors, I felt sorry for the other actors. My Chinese isn't perfect, you know", he said.

Working alongside Zhang Ziyi was also a memorable experience. "Zhang exudes inimitable charisma as a producer, but she is actually a very cheery and cute person who makes all the staff laugh", So said. "But once shooting begins, she gets immersed into the role so quickly. I was very impressed".

So is already one of the top actors in Korea, so why take a tougher road and shoot a movie in a foreign land. "If I limited my realm to just Korea, I would get anxious wondering how far I could go and how much I could achieve", he said. He plans to do a Japanese soap opera before the end of the year. "I heard it is a very unique work in a very novel way. After that I'd like to have some time to better myself. I'll continue to try to be a better actor", So said.