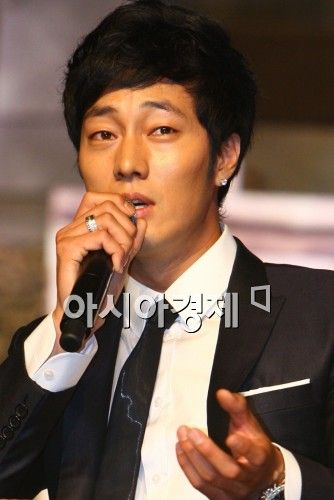 Korean actor So Ji-sub has said that he "felt bad" for actress Han Ji-min, his co-star in last year's TV series "Cain and Abel", about their marriage rumors last year.

The actor made the remark during an interview with Asia Economic Daily on Monday, speaking up about the rumor for the first time.

"I don't know why such talk came up. First came the marriage rumor and that there would a press conference the following day in regards to it but no reporter actually knew about it", explained the actor. "I even saw a photo referring to what they called a couple ring but there was no such thing".

"I felt bad for her [referring to Han Ji-min] because [marriage rumors] could be fatal for an actress", So said.

Last August, reports said the two stars were dating, but So and Han had both denied any romantic involvement through their agencies.

"I really want to meet a woman now. My idea of an ideal woman changes but I want someone who is very understanding and comfortable to be around", So added.

So, 32, is one of the most popular actors in Korea who has appeared in numerous TV dramas and movies since his debut in 1995. He became a household name in Asia with the back-to-back success of "Something Happened in Bali" (SBS, 2004) and "Sorry, I Love You" (KBS, 2004).

He currently stars in MBC's war drama "Road No.1", playing a soldier who is madly in love with one woman, played by actress Kim Ha-neul.