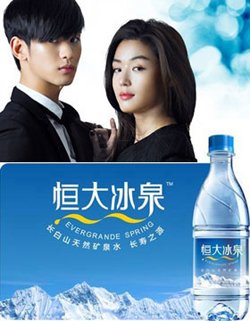 Soap stars Jun Ji-hyun and Kim Soo-hyun have found themselves at the center of controversy after appearing in a Chinese mineral water advertisement.

The two actors, whose popularity soared with the recent series, "My Love from the Star", appeared in a commercial for drinking water Hengda bingquan, whose source is allegedly the iconic Mt. Baekdu on the North Korean border with China.

The ad identifies the mountain by its Chinese name of Jangbaishan, which was one accommodation too far for some ardent patriots here, who believe the mountain to be the origin of the Korean race.

After rumors spread that each pocketed W1 billion (US$1=W1,021) for appearing in the ad, they faced a barrage of online criticism accusing them of being pawns in China's attempt to co-opt Korean history and territory.

The stars' agencies reacted to the pressure by asking the Chinese manufacturer to cancel the contract. A spokesman for Kim's agency Key East said, "We are willing to take on a lawsuit from the Chinese side whatever the damage".

Academics have dismissed the furor as a storm in a water glass. Chun Kwang-jin at Sungkyunkwan University said, "The mountain straddles both countries, so why would you object to the Chinese calling it Jangbaishan? It's not like Japan's attempts to claim Dokdo by calling it 'Takeshima'."

The name Jangbaishan existed centuries before an alleged campaign by the Chinese Academy of Social Sciences to co-opt early Korean history around the turn of the Millennium.

Under a 1962 treaty between China and North Korea, North Korea gained control over the southeastern parts of Mt. Baekdu and China over the northwestern area. At present, 54.5 percent of the mountain is under North Korean control.

Cho Beob-jong at Woosuk University said, "It's true that China has attempted to claim ownership of the ancient Koguryo and Balhae kingdoms of Korea by saying its ancestors lived there, but looking only at the nomenclature, "Changbaishan" exists in Chinese texts dating back to the 10th century A.D. and there are many brands in China using that name".

But Cho added, "Maybe Korean celebrities should have thought twice about the potential controversy and it would have been better if they hadn't appeared in the ad".

"Soap Stars in Controversy Over Chinese Water Ad"
by HanCinema is licensed under a Creative Commons Attribution-Share Alike 3.0 Unported License.
Based on a work from this source