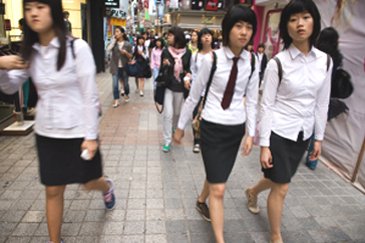 Korean students are hardworking in class, but there are fears of increasing anti-social behaviour in public schools.

Despite the fact that Korean education is currently ranked 2nd in the entire world by the EIU (Economist Intelligence Unit), domestic education specialists, scholars, teachers and the general public would probably agree that the national education system is still quite far from perfect.

In recent years on the wave of economic progress, Korean schools have advanced remarkably in resources and teaching quality standards with figures showing vastly improved academic benefits to students in a wide variety of areas. However, although society is reaping the benefits of the increase in knowledge, the socialization of students is still a burning issue.

School violence has been a difficult problem to resolve for a long time and many teachers and parents are worried about the degree of seriousness of school violence. According to a recent report by the Foundation for Preventing Youth Violence, more than 17.8 percent of Koreas 4 million school students have been victims of school violence. The number of victims is increasing and acts of bullying are becoming more brutal.

Bullies can cause their victims deadly distress not only through physical beatings and verbal abuse in and around the school area, but there is also a considerable growing trend in the use of different psychological techniques that leave victims feeling helpless and hopeless. Online cyber-bullying and the use of smartphones are increasingly reported as methods deployed by juveniles to mentally torment their peers.

In addition, those recently affected tell of unreasonable demands with 'bullying games' such as Wi-fi Shuttle and Bread Shuttle. Wi-fi Shuttle means, students are threatened and forced to turn on their internet connection and then bullies can create a hotline wi-fi network and use their own handsets for free. Those who had suffered from this form of intimidation also reported that they suffer high rates from this kind of abuse. The other popular form of extortion is, 'Bread Shuttle', when the victim runs errands for bullies to buy them snacks and drinks, but they dont even give them money for the snacks. Therefore, students not only lose their money but also their self-respect.

In serious cases, some students even try to kill themselves. A 16 year old student jumped off the 11th floor of her apartment after she was abused by a group of her fellow students. They had insulted her calling her names such as, fucking fat pig! Another shocking indicator of the extent of the problem is that more than 8 students have committed suicide in the last few months in Daegu alone. All of them were victims of different forms of mental and physical violence, subjected on them by their fellow students.

Research evidence suggests that, intimidation and violence is become an increasing social cultural phenomenon within the public school system. Links and connections to physical appearance, social-economic wealth and even educational status are factors of growing class divisions in a fiercely competitive environment.

The term birds of a feather flock together has always been a part of the traditional Confucian values of Korean society. The problem with this commonly held belief is that power corrupts and some students will use any positional advantage and opportunity they can get to isolate and exploit more passive students.

School violence is no longer an individual student problem, it has become a wide spread social ill. However, a lot of schools are still silent on the subject, choosing their own methods to deal with the problem. Meanwhile, a lot of victims and their parents say that the government and the schools have to take reasonable counter-measures and be more transparent on the issue. To reassure public confidence, they need to ensure a safer learning environment and better discipline for students regardless of their social standing through using clearly researched protocols and interventions.

The national police in cooperation with the Ministry of Education, Science & Technology and the Foundation for Preventing Youth Violence have taken extra initiatives to stop, root out and prevent the worsening of school violence for a long time. However, sharp increases in emergency 119 calls, which are designed to respond to victims of school violence, shows that many students still suffer from abuse or harassment.

The writer, Ms. Kim Do-Yeon, is a junior year student at Yeungnam University majoring in English Language and Literature. Her interests includes writing, travelling and spending quality time with her family and dog.