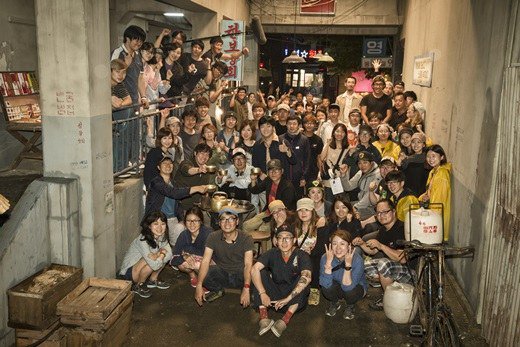 "My Dictator" has completed all filming and is now in post-production phase.

"My Dictator" is based in the 1970s right before the North and South Korean summit, about a nameless actor who is chosen to stand in for Northern dictator Kim Il-sung.

Imagination and stories add to the historical fact that Kim Il-sung had a stand-in. Park Hae-il and Sol Kyung-gu star in the movie as father and son.

Sol Kyung-gu stars as the stand-in Sung-geun and has gone through a major transformation for his character.

Park Hae-il is his son Tae-sik, who used to think of his father as the greatest but now sees him as a burden. He is a street gangster with complicated emotions towards his father and makes Park Hae-il look different from the usual characters he displays.

The final scene of the movie was taken in Changsin-dong, Seoul and involves Tae-sik in a car, talking to a woman he admires. This was a serious scene and the female character was played by Ryu Hye-young. With that, a 3-month journey came to an end and everyone patted each other on the back.

Directed by Lee Hae-joon, "My Dictator" will be released sometime at the end of the year after editing is completed.

"Sol Kyung-gu and Park Hae-il's "My Dictator" completes filming"
by HanCinema is licensed under a Creative Commons Attribution-Share Alike 3.0 Unported License.
Based on a work from this source