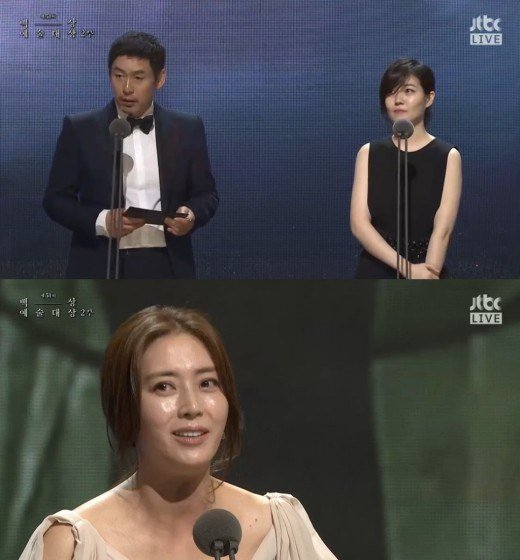 The 51st PaekSang Arts Awards was held in Seoul on the 26th. Song Yoon-ah won The Best Actress in TV.

Seol Kyeong-soo was an award presenter right before Song Yoon-ah had the trophy in her hands for the MBC drama "Mama - Nothing to Fear". She showed tears in her eyes as she said her speech for the award she received, which was the first time in 6 years.

Meanwhile, the 51st PaekSang Awards was held in Seoul on the 26th. It awards those who played a big part on TV and movies. This year, there are 12 categories for movies and 13 for TV dramas.

"Sol Kyung-gu cheers for wife Song Yoon-ah (PaekSang Arts Awards)"
by HanCinema is licensed under a Creative Commons Attribution-Share Alike 3.0 Unported License.
Based on a work from this source