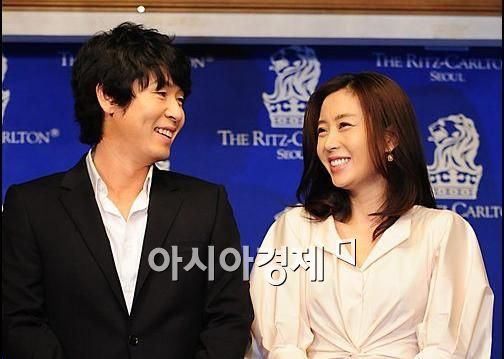 "Seol is known as one of the most successful actors in the business so his joining the company, combined with our professional management skills, is expected to bring about a synergy effect", a representative from E&TF said.

He and his wife Song will be joining top Korean actress Go Hyun-jung of last year's smash-hit historical drama "Queen Seon-deok" who is already under E&TF's management.

Seol made his debut in 1993 through theater and has starred in numerous hit films such as "Peppermint Candy", "Silmido", and "No Mercy". He is currently shooting for the pan-Asia omnibus picture "Camellia".

Actress Song rose to fame with her roles in MBC drama "Hotelier" and most recently appeared in films "Secret - 2009" and "Wedding Dress".

"Sol Kyung-gu, Song Yoon-ah sign with new agency together"
by HanCinema is licensed under a Creative Commons Attribution-Share Alike 3.0 Unported License.
Based on a work from this source