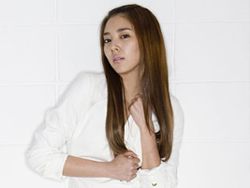 Son Dam-bi is not only considered one of Korea's most representative sexy queens, but recognized abroad as well. More specifically, China.

According to Pledis Entertainment on January 17th, Son attended the 2010 [V] Chinese Top Year-End Awards Concert, performed "Crazy" for her excited fans, and won the "Best Asian Star (aka Charm Award)" last December. This served as encouragement for all her efforts abroad.

Son has really been making a name for herself with her most recent single, "Queen", hitting number one on various online charts. Also, her acting in the 2009 drama "Dream - Drama" was chosen to air in China, garnering a bigger fan base. Her first song which really catapulted her domestically, "Crazy", is also being met with positive responses in parts of China and Southeast Asia.

As for the young star's 2011 plans? She will be preparing for further international promotions and for making her acting comeback throughout the first half of this year.