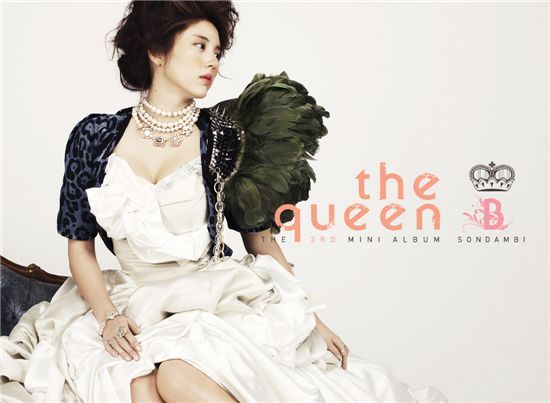 Korean songstress Son Dam-bi will be releasing her third mini-album later this week, according to her agency PLEDIS on Monday.

PLEDIS announced in a press release that Son's "the queen" will simultaneously hit stores and web-based music sites on July 8.

Son had released two album covers, one today and another three days ago, which show a classic and modern, respectively, to capture the concept of the new album.

Meanwhile, song "Can't U See", unveiled ahead of the official album's release, has already topped several online music charts since going on sale on July 2.

Title track "queen" and a teaser video will be revealed tomorrow on the singer's official website (http://www.sondambi.net).

Son started out in the entertainment industry with appearances in commercials before jumping into the music business. She has trained with famous American choreographers and is called the female version of Korean pop sensation Rain.

She released her debut single "Cry Eye" in 2007 and has released two mini-albums and a full-length album ever since. She is best known for her 2008 hit "Crazy" and her role in the SBS TV series "Dream - Drama" with Kim Beom.

"Son Dam-bi to release 3rd mini-album on July 8"
by HanCinema is licensed under a Creative Commons Attribution-Share Alike 3.0 Unported License.
Based on a work from this source