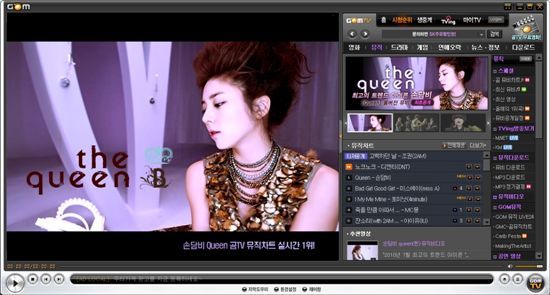 The music video for K-pop songstress Son Dam-bi's new song "queen" has been heating up the web since yesterday, topping the real-time music chart of popular video portal site GomTV for the past two days.

The video for the title track from her newly released third mini-album received 70,000 hits yesterday and continues to remain the most-watched music video with nearly 175,000 hits so far today.

She has accumulated over a total of 600,000 hits altogether on GomTV with both the full-length and teaser videos for "queen" as well as the teaser video for song "Can't U See", a ballad song from the album.

"queen" features electronic and rock beats, while the video is shot in the concept of a queen and gypsy fighting.

Son, 26, began her career in the entertainment industry with appearances in commercials before jumping into the music business.

She released her debut single "Cry Eye" in 2007 and has released two mini-albums and a full-length album to date. She is best known for her 2008 hit "Crazy" and her role in the SBS TV series "Dream - Drama" with Kim Beom.

"Son Dam-bi tops real time chart with new music video "
by HanCinema is licensed under a Creative Commons Attribution-Share Alike 3.0 Unported License.
Based on a work from this source