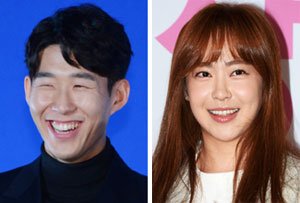 Tottenham Hotspur midfielder Son Heung-min has been papped on a date with Yoo So-young, an ex-member of girl group After School who has turned her hand to acting.

The candid shots were published by online gossip rag the Fact.

The website said Son and Yoo went on a night out together somewhere near Paju on Nov. 14, when Son was in Korea preparing for a match against Laos three days later.

Yoo, who is six years Son's senior, admitted their relationship in a press release as soon as the news broke, but Son has so far declined to comment on that matter.

In July last year, rumors circulated of a romance between Son and singer Bang Minah of K-pop group Girls' Day.

"Son Heung-min Dating Ex-Girl Group Member"
by HanCinema is licensed under a Creative Commons Attribution-Share Alike 3.0 Unported License.
Based on a work from this source