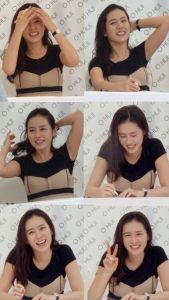 -It must be hard filming the drama "Spotlight" too
=I have never done two things at once, except "The Classic" and "The Great Ambition", which overlapped a little. Luckily, the movie is almost done, so it's manageable. If I filmed the whole night and slept deeply, I used to be okay, but I get tired now. I'm drinking a tonic made of black goat and red ginseng.

-Were you close to Kim Joo-hyuk before? The staff is complaining that you two joke around too much. They want you to be serious during rehearsal.
=We don't have a lot of NGs. With Kim Joo-hyuk, there is a lot of affection as lovers and a couple. There is a lot of time we have to spend together. If we're awkward, then it won't seem real. After trying to act natural, it just became comfortable. Our director used to ask us to be serious for just one minute, but now, he jokes around even more than us.
-A wife with two husbands. It must be satisfying to play In-ah who doesn't care about what others think.
=It's more exciting since our nation is still a paternal society. It's a story that overturns institutions and customs. From a man's point of view, he won't be able to sympathize with In-ah. If the original In-ah can't be understood and accepted even after separating, the In-ah in the movie doesn't want to part from Duk-hoon, but also loves Jae-kyeong at the same time. One of my fans said that there was a woman in England with two husbands and translated an article for me, and it says that she is happy that both men are waiting for her. Both of the men's parents know, and she is only living her life in a different way and is happy that she has a bigger family. I do envy her that she can live an independent life the way she wants to.

-Do you like soccer? A lot of the stories of soccer in the original were taken out, but In-ah has to be constantly talking about soccer.
=I liked player Yoon Jeong-hwan. In the 2002 World Cup, I went to all the games except the one with Italy. Just that much. I don't know all about international soccer clubs like In-ah.

-How does the relationship between Duk-hoon and In-ah, and Jae-kyeong play out in the movie?
=I can't tell you that. I think I can get the nuance of what she means when she says that you become twice your size when you love. Although I don't completely understand a woman who has two families. (Laughs)

"[Son Ye-jin] Envious of an independent life leading two men"
by HanCinema is licensed under a Creative Commons Attribution-Share Alike 3.0 Unported License.
Based on a work from this source