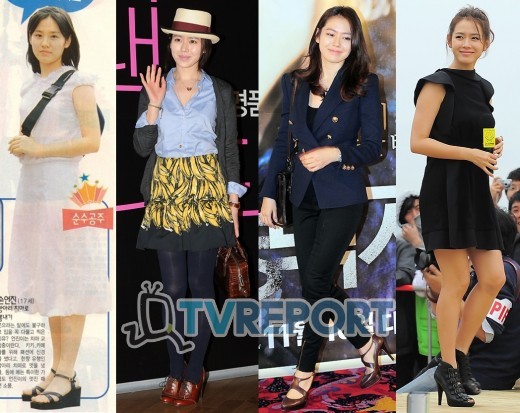 Recently on an online community bulletin came up some pictures under the title, 'Pure Princess' from a magazine in the past, "Ki Ki".

She was cast on the streets as a young fashionista and she is much younger and plumper than she is now but not much differently pretty than now.

There was also an explanation that, "She had the braces so her mouth is shut tight. She was wearing the latest trend skirt and a unique bag worn on the back". It is quite rustic compared to the sophisticated Son Ye-jin today.

Those who have seen the pictures say, "Rustic but still innocent", "She's wearing a big skirt with platform shoes", "She's only wearing braces but she is still looks the same. Looks like she lost some weight".

"Son Ye-jin high school days... where's the refinement? Very rustic"
by HanCinema is licensed under a Creative Commons Attribution-Share Alike 3.0 Unported License.
Based on a work from this source