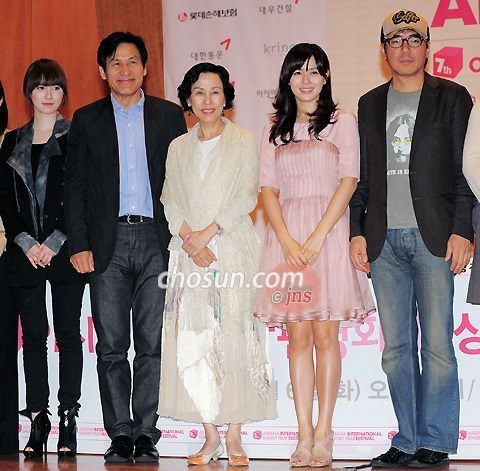 Actress Son Ye-jin has been picked as a jury member for the seventh Asiana International Short Film Festival, organizers told reporters Tuesday. She follows Kim Hye-soo, who was on the jury last year.

Ku Hye-sun was at the press meet not as an actress but as director of "The Cheerful Caretaker", the official trailer for the festival.

The AISFF will be held for six days from Nov. 5 at Cine Cube in Gwanghwamun, Seoul.
___________________
From left, actors Ku Hye-sun, Ahn Sung-ki, Son Sook and Son Ye-jin, and director Kim Jee-woon. The 7th AISFF committee pose for a photo at a press conference at the Kumho Art Hall in Seoul on Tuesday.