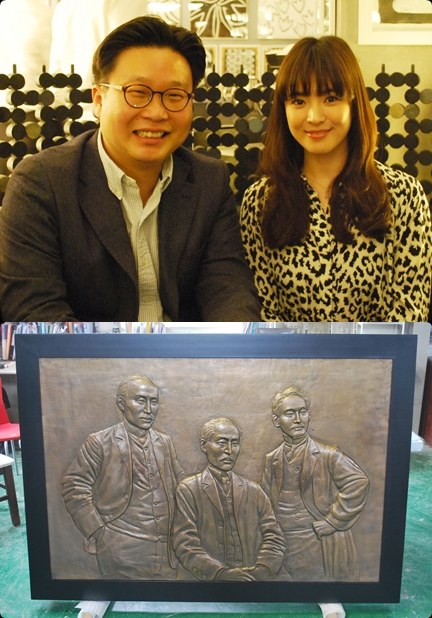 Professor Seo Kyeong-deok of Sungsin University said, "I have presented art to Lee Joon Memorial hall from the time of The Hague in the Netherlands along with actress Song Hye-kyo who is greatly known for her presentation of Korean pamphlets to Korean historic sites all overseas".

Professor Seo said, "We met with Lee Ki-hang and Song Chang-joo who have run the Lee XJoon Memorial hall since the foundation until now, and spoke about the things it needed. The result was a carving of the three patriots Lee Joon, Lee Sang-seil and Lee Wi-jong".

The Lee Joon Memorial Hall is where Lee Joon, Lee Sang-seol and Lee Wi-jong stayed during the second International Peace Conference in 1907. A picture of the three of them was carved onto stone just the way they were in the front pages of the papers back then.

According to the professor, the stone measures 1.7m long and 1.2m wide. It will be hung in the Lee Joon Memorial Hall on the 15th, in celebration of Independence Day.

Song Hye-kyo says, "I hope this donation is helpful in hosting foreign tourists in our country".

Meanwhile, Song Hye-kyo and professor Seo Kyeong-deok have been providing several museums all over the world with Korean services.

"Song Hye-kyo donates art to The Hague"
by HanCinema is licensed under a Creative Commons Attribution-Share Alike 3.0 Unported License.
Based on a work from this source