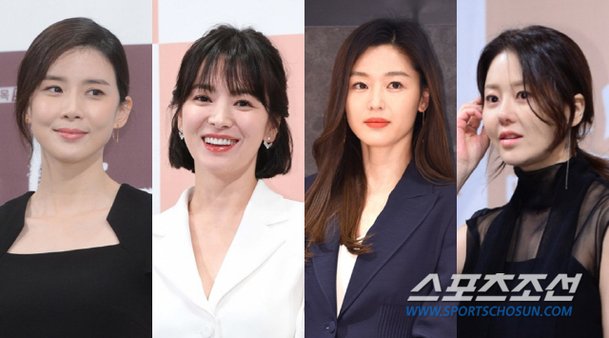 For a while, broadcasters were occupied by male actors such as Shin Ha-kyun, Yeo Jin-goo, Cho Seung-woo and Song Joong-ki. For the first time in 2 years, Song Hye-kyo, Go Hyun-jung, Lee Bo-young and Jun Ji-hyun are coming back. Song Hye-kyo has decided to return to the drama after a long wait after her divorce, and Go Hyun-jung will also portray a growing drama with a lyrical feel. On top of that, Lee Bo-young and Jun Ji-hyun's comebacks also entertain viewers who are waiting for the drama.

Song Hye-kyo's return is something that viewers have been looking forward to. In particular, Song Hye-kyo has decided not only on her comeback but she is also on her next film. Song Hye-kyo, who was a guaranteed viewer rating check and showed unlimited acting, will return with SBS's "Now, We Are Breaking Up" two years after tvN's "Encounter".

"Now, We Are Breaking Up" is a work that depicts the breakup and love story of four main characters, including Song Hye-kyo, Jang Ki-yong, Choi Hee-seo and Kim Joo-hun, while Song Hye-kyo plays Ha-yeong in the drama. Ha-yeong, the head of the fashion company's design team, is a cold-hearted realist and stability-ist, a self-managed and trend-conscious character. She will work with Yoon Jae-gook (Jang Ki-yong), a freelance fashion photographer who is younger than her. She will return through SBS in the second half of the year.

In addition, her next film has been decided. After KBS2's "Descendants of the Sun" (2016), a reunion with writer Kim Eun-sook was also scheduled for the first time in five years. Attention is also focused on the revenge drama that Song Hye-kyo and Kim Eun-sook will show together through "The Glory".

Go Hyun-jung will also return to drama after a long silence. Go Hyun-jung, who joined hands with Yoo Bo-ra of "Secrets", chose JTBC's "Reflection of You" as her comeback. "Reflection of You" which is scheduled to be aired in the second half of the year, tells the story of a woman who was faithful to her desire and another woman who lost the light of her life after meeting her. It is a drama about politics, betrayal, corruption, and revenge. Go Hyun-jung will play Hee-joo, a successful painter and essay writer after spending her youth in poverty, and Shin Hyun-bin is her co-star. It adds to the question of whether Go Hyun-jung and Yoo Bo-ra's writing skills will come together to save JTBC from crisis.

Lee Bo-young will return with writer Baek Mi-kyeong. tvN's "MINE" is a drama about tough women who escape the prejudices of the world and find their true selves. Lee Bo-young plays Seo Hee-soo in "MINE", which is written by writer Baek Mi-kyeong, who made "Woman of Dignity" and "Strong Woman Do Bong-soon" and director Lee Na-jeong of "Love Alarm". Seo Hee-soo is a former top actress and the second daughter-in-law of a chaebol family. She will catch the viewers' attention as a character who stands out for her imposing behavior and charisma. Attention is also focusing on the direction of Lee Bo-young's heavy presence which will be the center of a mysterious incident.

Jun Ji-hyun's comeback, which breaks the four-year hiatus, is also a key point of expectation among viewers. She is scheduled to collaborate with writer Kim Eun-hee-I, who is back after a long time since SBS's "The Legend of the Blue Sea" in 2016. She, who was in Netflix's "Kingdom - Season 2" last year, will return as the main character of "Kingdom: Ashin of the North" and has also been confirmed as the main character of tvN's "Jirisan", directed by Lee Eung-bok. Expectations for her return film are rising even higher. Especially "Jirisan" which is a mystery drama about people climbing the mountain against the backdrop of Jiri Mountain. Set on Jiri Mountain, it is about a mountain ranger who saves victims. Jun Ji-hyun is the best ranger Seo I-kang of Jiri Mountain National Park. Expectations are also high for the scenic views that will be shown with Ju Ji-hoon.

Recently, male actors' works have passed and actresses' comeback rush is continuing. A production official said, "The presence of women's epic dramas has become much larger than in the past, and the comeback of actresses continue".