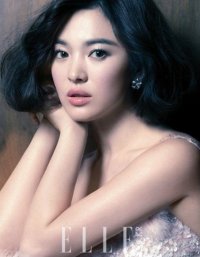 Following Jang Dong-gun and Jun Ji-hyun, actress Song Hye-kyo will also make her U.S. screen debut. But instead of heading to Hollywood, the 25-year-old left for New York Nov. 21 to take part in a low-budget independent film project.

In the psychological thriller "Fetish", Song will play the role of a Korean woman with supernatural powers, who possesses an American woman's body in order to steal her husband. She will star opposite Austrian actor Arno Frisch, who is well known from the 1997 film "Funny Games".

Korean filmmaker Son Soo-peom will helm the project. The New York University graduate is the silver medallist of the 2002 Student Academy Awards and was invited to the Cannes Film Festival that same year for his short films. Sohn makes his feature film directorial debut with "Fetish".

Casting director Susan Shopmaker ("Hedwig and the Angry Inch", Michael Kang's "The Motel" and "West 32nd") took note of Song in her latest film "Hwang Jin Yi" at the Pusan (Busan) International Film Festival in October. She was reportedly impressed by Song's beauty, which has both Eastern and Western charms, according to Song's management agency Sidus HQ.

Most of the dialogue will be in English with some Korean. Song has been polishing her English during visits to New York and through lessons here, according to Sidus HQ.

The actress shot to hallyu superstardom through her roles in TV dramas "All In" and "Full House", but she was not so lucky on the big screen, with "My Girl and I" and "Hwang Jin Yi" garnering lukewarm responses.

"Fetish" is expected to become a stepping-stone for Song's international debut. "Song Hye-kyo has been receiving offers from Hollywood. While carefully looking through the scripts, she chose this one because it establishes a common ground between East and West", Na Byeong-jun from Sidus HQ told Yonhap.

"Song Hye-kyo Makes U.S. Debut in Indie Flick"
by HanCinema is licensed under a Creative Commons Attribution-Share Alike 3.0 Unported License.
Based on a work from this source