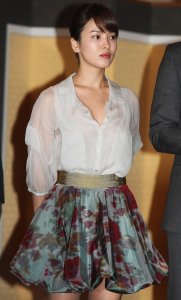 Korean dramas are full of entertainment, with cliched yet dramatic plots, cute and handsome male characters, both main and supporting, and always a young pretty heroine.

Among these heroines is Song Hye-kyo, 26, who will appear in the new drama "Worlds Within". She returns to the small screen for the first time in four years after her hit series "Full House" with top singer/actor Rain.

"For the past four years, I have been working on three films and so I was more accustomed to the movie filming atmosphere. TV dramas require quick reactions and with help from the director, I'm now back on track", Song said at a press conference of the program Monday at a hotel in Seoul.

The makers of the drama also made headlines, as the producer Pyo Min-soo, who brought "Full House", and writer Noh Hee-kyeong have teamed up. It is the first time in six years for the makers to get together for a program.

Despite criticism that large-scale dramas lack depth in both plot and charm, Pyo said the series will be bigger than any program he has worked on.

"I'm trying to bring reality to the drama making process which takes place within "Worlds Within". The scale has become larger than before, and to be frank, I was worried if I could manage it all", he said.

But Pyo assured that he will try to show even the smallest details of the daily lives of producers.

Song plays Joo Jun-young, a producer working her way in the male dominated world of drama creators. Actor Hyun Bin will play her mentor, who makes Joo's character's life miserable at first, but later discovers his affection toward the hard-working and passionate newcomer.

"My character is much like a tomboy. I try to portray the look by being as natural as possible, but I don't try too hard by getting messy. It's the most realistic character I've done in my career", said Song.

The actress has indeed played various roles, from a dying patient and poker dealer to a silly student.

Song made her debut as a model, becoming the winner of a school uniform model competition at the age of 14.

She then played the character of a cute and clumsy student in the hit sitcom "Soonpoong Clinic" (1998), but failed to make a lasting impression among fans.

Song finally made it big starring in "Autumn in my Heart" with Song Seung-heon in 2000 and "All In" with Lee Byung-hun in 2003. The dramas' popularity soared not only in Korea, but also abroad including Japan, Taiwan and Europe, and Song finally became one of "Korea's sweethearts".

However, she failed to bring her charm to the big screen with her first movie "My Girl and I". Song continued her journey in the movie industry with the historical film "Hwang Jin Yi".

"The dramas that I worked on were successful, but not the movies. I still have many opportunities, and I will not be discouraged. I think actors grow as they taste failure and so I don't have any fears about the drama not becoming popular", she said.

"Song Hye-kyo Returns to Small Screen"
by HanCinema is licensed under a Creative Commons Attribution-Share Alike 3.0 Unported License.
Based on a work from this source