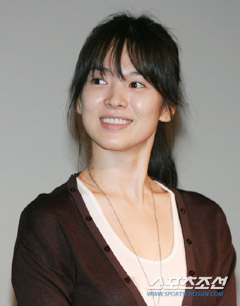 Actress Song Hye-kyo is releasing a glamorous photobook of her shot by several top photographers including the fashion world's Peter Lindbergh and supermodel-turned-photographer Helena Christensen.

The first of its kind by a Korean actress, the book entitled "Moment" is to be released Friday with proceeds to be donated to an organization for children. Pre-orders have already been placed overseas for over half of the limited first run of 2,000 copies.

Song, 28, was hardly seen on TV after the 2008 drama "Worlds Within", instead participating mostly in small-scale independent films and overseas projects.

She appeared in the episode "Love for Sale" of the omnibus film "Camellia", which screened at last year's Pusan International Film Festival. She also made her overseas debut with the U.S. indie film "Fetish", and played a role in renowned director Wong Kar-wai's new film "The Grand Master".

In between these productions she worked on the photobook, staying overseas for several months to shoot. The book features photos of the actress taken in locations around the world, including Atlanta, New York, Buenos Aires, Patagonia, Paris, the Netherlands and Brazil.

"Song Hye-kyo Returns to Spotlight with Photobook"
by HanCinema is licensed under a Creative Commons Attribution-Share Alike 3.0 Unported License.
Based on a work from this source