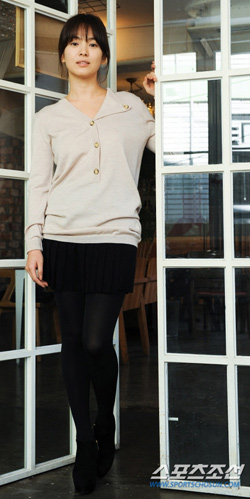 After vanishing from the public's view for the last three years, actress Song Hye-kyo has returned to the silver screen with "A Reason to Live", a story about a woman who forgives a boy for killing her fiancé.

The movie was directed by another long-term absentee, Lee Jeong-hyang, who got back behind the camera nine years after pumping out hits such as "Art Museum By The Zoo" and "The Way Home".

Song has hardly been seen in Korea since her movie "Hwang Jin Yi" screened four years ago but she has been anything but idle. The 30-year-old, who rose to fame in domestic soaps such as "Full House" (2004) with superstar Rain, has more recently been sharpening her skills and busying herself overseas.

She had a collection of photographs taken in foreign countries, completed shooting an American independent film "Fetish", as well as the omnibus movie "Camellia", and has for two years been working on Hong Kong director Wong Kar Wai's "The Grand Master". This has seen her shuttle back and forth between Korea and China since December 2009.

"I was so tempted by both "Fetish" and "Camellia" because the subjects were very unusual in both cases and the scenarios were so interesting", Song said. "And I wanted to take on new challenges. If you want to do something new, you have to show something that people haven't seen from you before". She added that she plans to return to China to further her career.

Although Song is no spring chicken anymore, her appearance doesn't show the passing of time. But she said with a smile, "Now I am aware that I got older".

Asked about the aftereffects of her two romantic relationships that caught the public's attention, she said, "I think the time when I felt uncomfortable about living under a microscope has gone. I'm no longer afraid of such things. What I did was typical of any woman my age. In fact, I haven't had any time to feel lonely" since breaking up with her last boyfriend, heartthrob Hyun Bin who currently serves in the Marine Corps.

"A Reason to Live" is a movie about forgiveness and Song acquits herself well in the role, pulling out heart-rending performances as a broken-hearted woman who has lost the love of her life.

"It feels great to be on the receiving end of so many compliments about my acting, and hearing that I've matured", she said. "Now I feel that my acting skill before was not so refined. Maybe no actors are ever really satisfied with their performances. That's certainly true in my case".

"Song Hye-kyo Returns with New Movie"
by HanCinema is licensed under a Creative Commons Attribution-Share Alike 3.0 Unported License.
Based on a work from this source