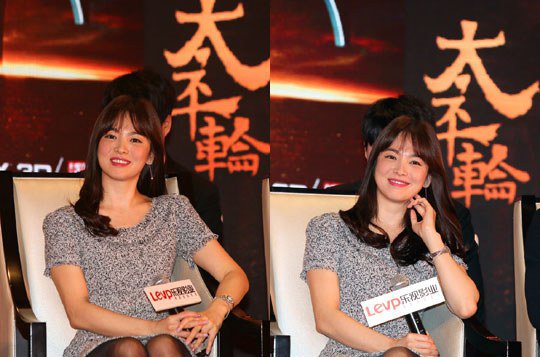 The premiere for movie "The Crossing 2014" was held in Shanghai, China on the 25th. Song Hye-kyo, director John Woo and Jincheng Wu were there.

In the movie, Song Hye-kyo plays a woman who adapts to the world after losing her husband.

"The Crossing 2014" is based on a ship sinking accident in the 1940s and the romance between three couples among the disaster. Directed by John Woo, the cast includes Song Hye-kyo, Haung Xiao Ming, Tong Da Wei, Zhang Ziyi, Nagasawa Masami and others.

"Song Hye-kyo's beauty conquers China"
by HanCinema is licensed under a Creative Commons Attribution-Share Alike 3.0 Unported License.
Based on a work from this source