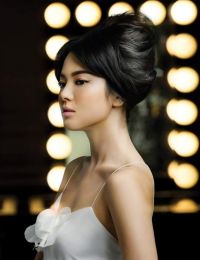 Actress Song Hye-kyo will return to the small screen as an up and coming producer in KBS' new drama "Worlds Within" produced by Pyo Min-soo and written by Noh Hee-kyeong.

"When I finished filming `Full House' with producer Pyo four years ago, we promised to work together with writer Noh. I was their fan and so I had no reason to say no", Song said during an interview with Yonhap News Agency.

"Worlds Within" depicts the story of producers who work in a broadcast company. Her costar Hyun Bin will also appear as a fellow producer. The drama brings the two actors together as fellow students, colleagues and eventually, lovers.

"I liked that it wasn't a Cinderella story many people dream about. It's different from previous melodramas. Scenes that may really happen in our daily lives happen in the drama", she said.

After appearing in the hit drama "Full House" with singer/actor Rain in 2004, she mainly worked on the big screen, appearing in two movies. She has also been active in commercial ads, both here and abroad. Her popularity in China led her to win a role in John Woo's new movie "1949" with Taiwanese actor Chang Chen and also in signing a contract with Stellar Entertainment led by Chinese megastar Michelle Yeoh.

"I think working on something like `Autumn Fairy in My Heart' led me to this point. People tell me that I'm a 'Hallyu' (Korean wave) star, but I'm the same. I just tell myself if I work well with my work now, everything will turn out fine. I'm not greedy, but I'm not that pressured either", said Song.

She will start filming the movie "1949" next year and start her journey as yet another Korean actor expanding overseas.

"I don't think I was born to act. I've been acting for 12 years now, and me putting effort into it makes a large part of my acting. But I've never regretted my life as a celebrity. I want to have fun and be good at it", she added.

"Song Hye-kyo to Become Producer in New Drama"
by HanCinema is licensed under a Creative Commons Attribution-Share Alike 3.0 Unported License.
Based on a work from this source