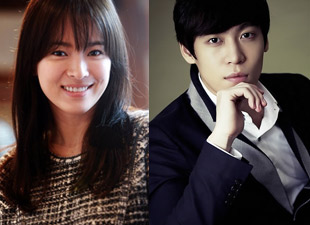 It's hard to say who's the more popular one these days. The petite actress who has a string of hit dramas under her belt after 16 years in the biz and was also chosen as TC Candler's 5th most beautiful woman in the world? Or the tall, handsome newbie solo singer that took k-pop by storm after nearly winning the most popular singing survival show in 2010 and is now promoting his hit song "Falling"?

How are the two even linked together? Well, currently they're not, but they will be very soon after the release of their duet song together. This would be the first singing project by Song since her debut.

Netizens are all excited after the teaser video dropped via Youtube. It has Song and Park talking on the phone, with Song saying, "I want to sing. Ah~ I'm so nervous!". Park responds on the other line by excitedly saying, "Song Hye-kyo? Oh my god". No other information was given.

The song drops on March 8th.

"Song Hye-kyo To Sing Duet With John Park"
by HanCinema is licensed under a Creative Commons Attribution-Share Alike 3.0 Unported License.
Based on a work from this source