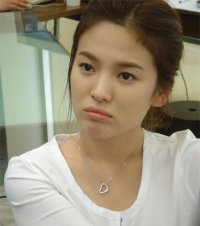 Korean actress Song Hye-kyo will star as the heroine of John Woo's new movie "1949".
The 26-year-old star will join Taiwanese actor Chang Chen in the movie depicting a tragic love story set in 1949, when China was suffering a civil war between the Nationalist and Communist parties.

Woo, the director of hit movies "Face Off (1997)" and "Mission Impossible II (2000)", appeared with Terence Chang, the producer of the film, and Song at a press conference held at the Hotel Majestic Cannes, with the festivity of the Cannes Film Festival still in the air.

"Among my other films, this will be the one that will underline humanity the most", Woo was quoted as saying by Yonhap News.

"I was offered the role early this year, and the scenario was very tempting. I am very pleased to be working with director Woo", said Song.

Woo is waiting for his movie "Red Cliff" to be released this summer. "Red Cliff" tells the story of a famous war during the Three Kingdoms period in ancient China. Chang will also appear in the movie.

Song has been in numerous dramas, commercials and films, including the hit drama "Full House" (2004). She recently finished shooting independent movie "Fetish" in the U.S.

"Song Hye-kyo to Star in New John Woo Movie"
by HanCinema is licensed under a Creative Commons Attribution-Share Alike 3.0 Unported License.
Based on a work from this source