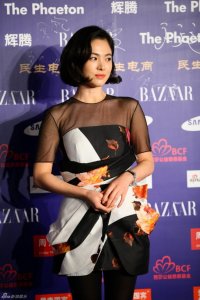 Song, one of the best known Korean actresses in Asia, surprised many when she chose to work on an independent film by first-time Korean-American director Soopum Sohn.

"The film is not necessarily a Hollywood debut for me, rather it is an independent American movie", Song said, Sunday in Busan. "I was very comfortable acting because I was working with people who loved movies".

A joint U.S.-Korea production, "Fetish" is described as a psychological thriller about a woman shaman Sook-hee, who chooses to live an ordinary life in the United States. She marries a Korean-American named Peter, played by Arno Frisch.

Song's character in the film is something of a femme fatale, a role that is new to the actress who has played mostly sweet, innocent characters in popular Korean dramas like "Full House" and "All In".

"The role was a challenge because it is a character that I have never played before. I didn't choose it to change my image, I chose the work because I liked the overall feeling I got from reading the scenario", Song said.

Song's dialogue in the film is about 80 percent in English. "It was really difficult. The staff all turned into English teachers and corrected my pronunciation. I am grateful to them", she said.

Her co-stars only had good things to say about Song. Firsch praised Song's professionalism on the set.

When asked about Song's English ability, co-star Athena Curry said it was "excellent".

"Song Hye-kyo Unveils US Indie Film in Busan"
by HanCinema is licensed under a Creative Commons Attribution-Share Alike 3.0 Unported License.
Based on a work from this source