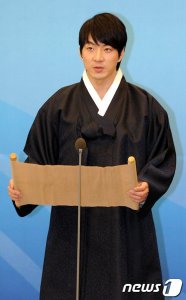 The team of KBS 2TV's drama, "Land of wind", finally wrapped up its shoot with Song Il-gook in China and returned to Korea on July 30th.

According to its production company, Chorokbaem Media, the "Land of wind" team left for Shanghai on June 16th and spent 45 days filming around China. Many of the scenes were shot in Wuxi, about one to two hours from Shanghai by car, Lanzhou and Zingtai, which is two hours from Beijing by plane.

"We had difficulty filming due to the monsoon", said Chorokbaem. "And toward the end, we were rushed and pressed for time".

After one day off, the filming crew will continue the "Land of wind" shoot as they travel through the countryside of Korea.

Set for a temporary September release, "Land of wind" is a 36-part drama based on the popular graphic novel series by Kim Jin-I. "Jumong", "All In", and "Heo Jun" writer Choi Wan-gyoo wrote the teleplay and Kang Il-soo of "Emperor of The Sea" fame is directing.

"Song Il-gook Wraps Shoot in China"
by HanCinema is licensed under a Creative Commons Attribution-Share Alike 3.0 Unported License.
Based on a work from this source