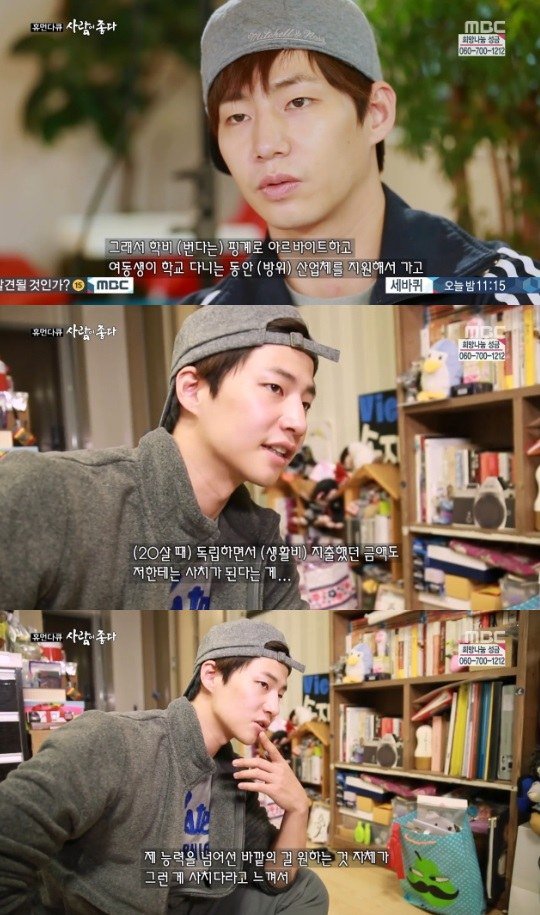 Song Jae-rim debuted as a model for commercials in 2009 and started his acting career playing a small role in the movie, "Actresses". He started gaining popularity with his appearance in the MBC TV drama, "The Sun and the Moon". He has become one of the hottest men this year with innuendos in his comments , his rather bold affectionate touching and romantic comments in MBC entertainment show, 'We Got Married', winning many female viewers' hearts.

On this episode of 'Human Documentary: Good People', he recalled the time when his family was going through a difficult financial situation. "We had two college students in the house. It cost so much money to support two college students by just one year difference in the age. To earn money for tuition fee, I worked part time and served for defense contractor companies"

He has been keeping a record of his daily expense since he started making money. He said "being luxurious does not just mean buying luxury brands or purchasing expensive cars. I felt sad when basic daily spending was a luxury for me at the time".

I became humble with my spending after having realized spending outside of what I can afford is extravagant".

"Song Jae-rim says basic daily expenses were luxury for him living on his own since 20 years old "
by HanCinema is licensed under a Creative Commons Attribution-Share Alike 3.0 Unported License.
Based on a work from this source