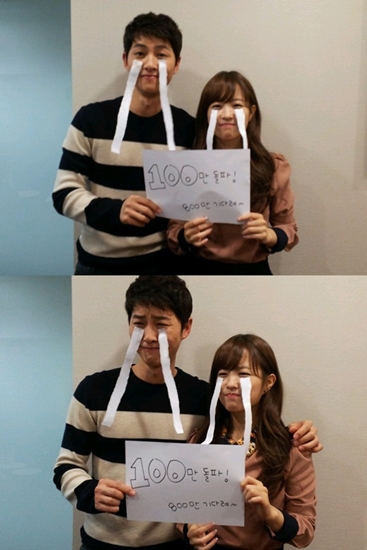 "A Werewolf Boy" Song Joong-ki and Park Bo-young took a picture in celebration of the movie hitting the million mark.

CJ Entertainment revealed a picture of the two overwhelmed at the number of audiences that watched their movie.

In the picture, Park and Song have pasted strips of white paper on their faces to create a ' crying ' look. They are also holding up a paper hat says, "We made a million! Wait for 8 million next!".

Meanwhile, "A Werewolf Boy" is about the impossible love between a human and a werewolf created by Jo Sung-hee who is known as the genius of commercial movies.

It broke thought a million audiences for the first five days which is 3 days earlier than "Architecture 101".

"Song Joong-ki and Park Bo-young's "A Werewolf Boy" hits a million"
by HanCinema is licensed under a Creative Commons Attribution-Share Alike 3.0 Unported License.
Based on a work from this source