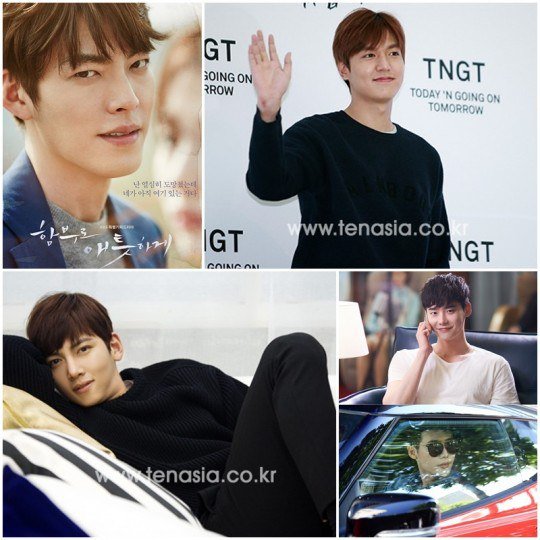 A new group of Hallyu kings are coming after Park Hae-jin, Song Joong-ki and Eric Mun.

Yoo Jeong ("Cheese in the Trap"), Captain Yoo Si-jin ("Descendants of the Sun") and Park Do-kyeong ("Oh Hae-Young Again") have gone and 4 more are coming up. These Asian Hallyu stars are increasing anticipation as days go by.

Kim Woo-bin takes on the role of top star Sin Joon-yeong. He's handsome and smart. His co-star is Suzy who appears as a documentary producer named No-eul. A previously released teaser of Kim Woo-bin captured him saying, "Let's date for 3 months".

Lee Jong-suk is coming back with the new MBC drama "W" as a young an successful entrepreneur named Kang Cheol.

Kang Cheol was a national athlete who won gold medals at the Olympic but decided to study computer engineering and created a venture business worth a trillion won. He is one of the wealthiest characters in drama history and a justifiable man. His co-star is Han Hyo-joo in the role of Oh Yeon-joo who goes back and forth different dimensions with him. The drama is written by Song Jae-jeong who has a unique set of imagination.

Ji Chang-wook is coming back with the new tvN drama "The K2". Ji Chang-wook became a Hallyu star last year with "Healer". Fans are welcoming his comeback with open arms.

"The K2" is the story of a bodyguard who loves his country so much but is abandoned by it and a presidential candidate who uses love as a weapon and his hidden daughter. This drama is written by Jang Hyeok-rin.

Lee Min-ho is back with Jun Ji-hyun the Hallyu Queen. Fans are calling it, "My Heir From the Stars".

Lee Min-ho is coming back with the SBS drama "The Legend of the Blue Sea" which is based on a historical tale about a mermaid. The historical tale tells the story of a fisherman who returns the mermaid he catches back into the sea. Writer Park Ji-eun from "My Love from the Star" is about to spread out her imagination here once again.

Apparently, Lee Min-ho agreed right away to Park Ji-eun. "The Legend of the Blue Sea" is also his first challenge after leaving the company he was with for 10 years and standing on his own.

"Song Joong-ki, Park Hae-jin and Eric Mun gone, now it's Kim Woo-bin, Lee Min-ho, Lee Jong-suk and Ji Chang-wook"
by HanCinema is licensed under a Creative Commons Attribution-Share Alike 3.0 Unported License.
Based on a work from this source