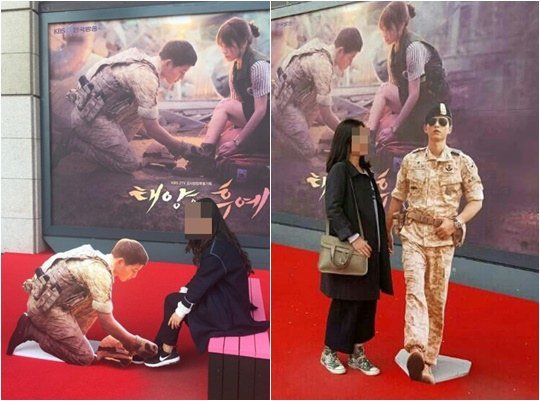 "Descendants of the Sun" Yoo Si-jin, Song Joong-ki's popularity is soaring at the moment.

The KBS 2TV drama "Descendants of the Sun" has a photo zone with Song Joong-ki's life-size poster that is encouraging fans to visit.

The photo zone was a big hit as announcers and stars visiting the KBS building and fans from Korea and other countries stopped by to take pictures with the life-size poster.

However, those who visited the site on the 8th were disappointed to see that one of the two life-size figures of Song Joong-ki was gone. There were two of them, one of which is of Yoo Si-jin walking and the other one of him tying someone's shoelaces.

A female fan in her 40s told News N, "I went to the photo zone to take a picture with the figure of Yoo Si-jin tying my shoelaces. I wore sneakers for that too but the figure was not there". Sources say it might have been stolen.

According to witnesses, visitors of the photo zone had to wait in line to take pictures with the life-size figure. The popularity might have led to the theft of the figure.

"Song Joong-ki's life-sized figure gone from "Descendants of the Sun" photo zone"
by HanCinema is licensed under a Creative Commons Attribution-Share Alike 3.0 Unported License.
Based on a work from this source