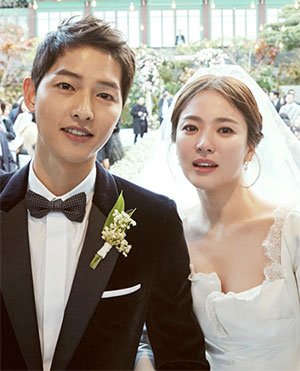 Korea's hottest couple Song Joong-ki and Song Hye-kyo tied the knot on Tuesday at a hotel in Seoul.

The couple co-starred in the megahit TV series "Descendants of the Sun" last year, and they took their relationship off screen.

They finally admitted their relationship in July with abrupt wedding plans after repeatedly denying rumors they were dating.

The outdoor ceremony was held in private and did not allow any press coverage.

There was no officiant. Instead, the bride's old friend and musical star Ock Joo-hyun sang a love song for the wedding, and co-actors such Lee Kwang-soo and Yoo Ah-in read letters of congratulation. Guests were also wowed when actor Park Bo-gum played the piano to congratulate the newlyweds.

Many stars and celebrities gathered to see the ceremony. Among the guests was Chinese actress Zhang Ziyi, who has appeared with the bride in Chinese films "The Grandmaster" and "The Crossing".

The wedding venue was packed with people, including hundreds of Asian fans who came all the way to Korea hoping to see a glimpse of the star couple. Some Chinese media outlets even broadcast the scene live. 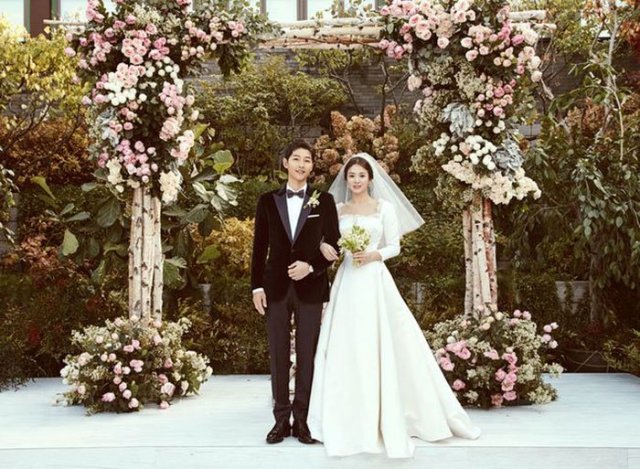 "Song Joong-ki, Song Hye-kyo Marry in Private Wedding"
by HanCinema is licensed under a Creative Commons Attribution-Share Alike 3.0 Unported License.
Based on a work from this source