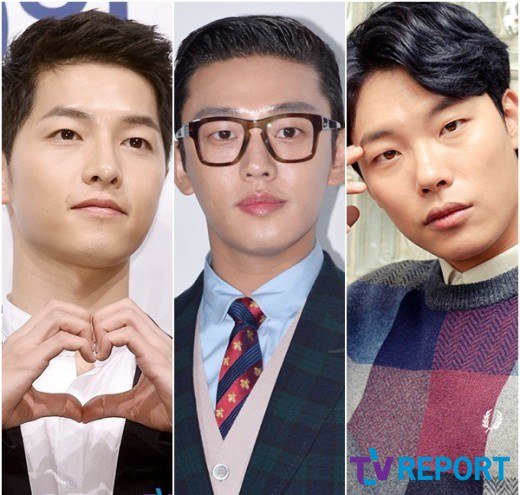 Everywhere they go, they bring along the spotlight. Song Joong-ki is at the peak of his career with "Descendants of the Sun", Yoo Ah-in is taking it all in with movies and dramas and Ryu Jun-yeol rose to stardom the moment he appeared.

Everyone is crazy about Song Joong-ki. 'Popular' is not even enough to express his fame thanks to "Descendants of the Sun". "Syndrome" is more like it and he's in the middle of it.

Song Joong-ki debuted in 2008 with a movie called "A Frozen Flower" but he wasn't a manly character as he has a pretty face. However, being an actor means training one's self with image. He slowly created a manly aura for himself and this led to the birth of Captain Yoo Si-jin.

Is there a need to say more about his expansion to the Asian continent?

Yoo Ah-in is a late bloomer. He debuted early but he is the last one to have rose to fame compared to the other two. However, he has a big plate. He is strong anywhere he is put with more viscosity than anyone else.

He debuted in 2003 with the teen drama "Sharp 1". Reactions to the new actor were good and he earned a solid base of fans. However, he reserved some time for himself and starred in various movies to build experience and then came back with a bang in "Sungkyunkwan Scandal". He had good chemistry with Song Joong-ki who was also in the drama.

Yoo Ah-in has become one of the most trusted actors of the time.

Ryu Jun-yeol – some are just born to be great

Ryu Jun-yeol is quick in every way. He rose to stardom quickly and took on a lead role in no time. He debuted the latest out of the three but he caught up quickly. He debuted in the movie "Socialphobia" last year and became a star with the tvN drama "Answer Me 1998". The public isn't crazy about him for no reason.

Ryu Jun-yeol is an outstanding actor despite being new and is very vigorous. He was meant to be where he is now. Everyone has the hots for him and he is coming back with "Lucky Romance" with senior actress Hwang Jung-eum.

"Song Joong-ki, Yoo Ah-in and Ryu Jun-yeol, the 85-86 Avengers"
by HanCinema is licensed under a Creative Commons Attribution-Share Alike 3.0 Unported License.
Based on a work from this source