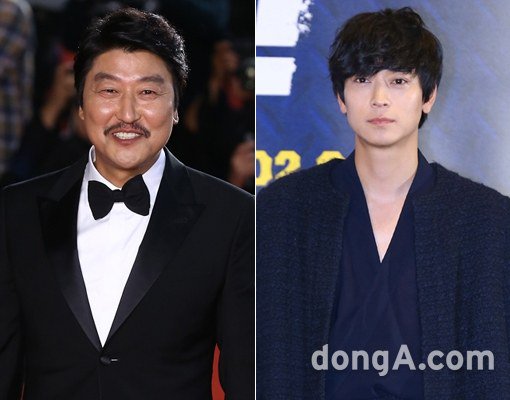 Will the rendezvous between Song Kang-ho and Gang Dong-won happen again?

Ticket power holders Song Kang-ho and Gang Dong-won are likely to star in the movie "Fifth Column". Song Kang-ho has already hopped on board while Gang Dong-won is going through details after being mesmerized by the scenario. If he decides, then it's the first time in 5 years since "Secret Reunion" that they are co-starring in the same movie.

"Fifth Column" is an action thriller about a military investigator facing a huge scam. A spy gang is the main subject of the movie and Song Kang-ho was on top of the casting list. He takes on the role of the military investigator and Gang Dong-won has been offered another leading role that's the opposite in terms of character.

According to sources, Gang Dong-won has shown a great deal of interest in the scenario. He's going to wrap up "Master" and join "Fifth Column".

Gang Dong-won has continuously been coming up with movies in the last 1~2 years and has been creating a solid base for himself. He is currently in the Philippines for the movie "Master" and will return this month.

Prior to "Fifth Column", Song Kang-ho is also in the middle of making another movie called, "A Taxi Driver". Based in Gwangju in the 1980s, Song Kang-ho takes on the role of a taxi driver.

"Song Kang-ho and Gang Dong-won in "Fifth Column""
by HanCinema is licensed under a Creative Commons Attribution-Share Alike 3.0 Unported License.
Based on a work from this source