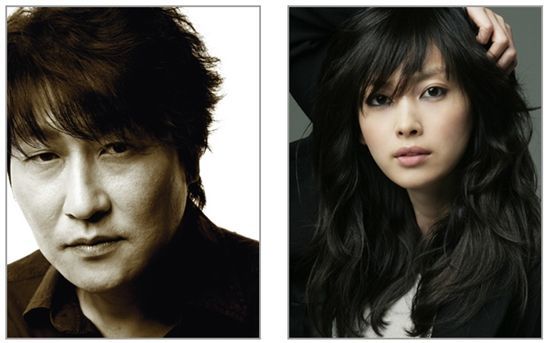 Korean actors Song Kang-ho and Lee Na-young have been cast as the leads in a new film, according to the film's promoter Opus Pictures on Wednesday.

Opus Pictures announced through a press release that Song and Lee will co-star in a new action flick tentatively titled "Howling", helmed by famed director Yoo Ha, which will crank in early next year with its premiere date yet to be set.

In "Howling", both Song and Lee will play detectives in charge of violent crimes while trying to unravel the case of a serial murder caused by spontaneous combustion which is also linked with a wolf-dog.

Song is one of the leading actors in Korea who made his name known through the movie "No. 3" in 1997. He is also famous for taking on various roles such as a gangster, soldier, wrestler and vampire through his movies "The Show Must Go on", "JSA - Joint Security Area", "The Foul King" and "Thirst".

He won the Best Actor award during the 2007 Asian Film Awards and has attended various film fests including the prestigious Cannes Film Festival.

Lee, 31, debuted in 1998 and starred in dramas "KAIST", "Ruler of Your Own World" and "Ireland". She also made stepped onto the big screen with roles in "Dream", "Maundy Thursday" ("Our Happy Time") "Teach Me English" and "Someone Special".

She recently starred in KBS' action comedy series "The Fugitive Plan B" with singer and actor Rain.

"Song Kang-ho and Lee Na-young cast in new action film "
by HanCinema is licensed under a Creative Commons Attribution-Share Alike 3.0 Unported License.
Based on a work from this source