In an interview at a hotel in Sokong-dong, actor Song Kang-ho said, "First of all, I could easily identify my own personality with the character I played in the movie ‘Secret Reunion' better than in any of my other movies. The character of Han-kyu in Secret Reunion seems to me to be a mix of previous characters I played before, including Doo-man ("Memories of Murder") and Kyung-pil ("JSA - Joint Security Area"). I think that my character Han-kyu is a unique character, but I also used several of my previous characters from my other movies to influence the character 'Han-kyu'. I see my role as Han-kyu to be an assorted gift of my acting experiences for my fans. I tried to show the essence of my acting through Han-kyu and to express him as a father and a husband in his daily life, even though Han-kyu is an agent of the National Intelligence Service (laughing)".

Song, who has gained growing popularity and recognition for his acting credentials, plays Han-kyu, a former agent of the NIS in the movie "Secret Reunion", which is the second movie by director Jang Hoon, whose first project as the main director was "A Movie is a Movie". "Secret Reunion" will be released on February 4. 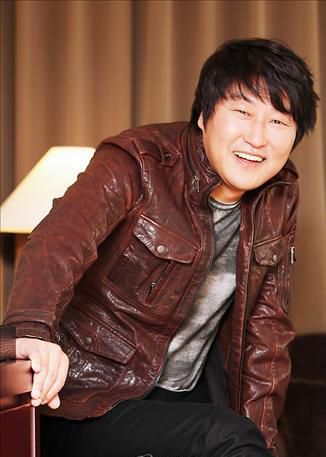 Song, a middle aged man with 2 children, is not different from other fathers even though he has special concerns as an actor. As a father, he also cares about the health, future, and academic performances of his children.

Song said, "I was thinking about sending my children to study abroad to improve their English. However, as a father, I would have to sacrifice my own happiness if my children go study abroad at an early age. Therefore, I had to think really hard to decide and then I finally decided to have happiness as a father (laughing)".

In "Secret Reunion", a buddy film, Song appears together with Gang Dong-won for the first time. During the interview, Song described Kang, who played his partner Song Ji-won, as an attractive actor.

Song said, "Some people worried whether my appearance would be a good match for his because we are "Secret Reunion". However, our personalities compliment each other very well in the movie, so, we both agree that we made a fantastic pair as Secret Reunion in the movie (laughing)". Song added, "As a young man, Gang Dong-won is cautious as well as clever. Most of all, his strength lies in being honest about his feelings".

Song said he appeared in the movie because he trusts in the director, Jang Hoon, despite lower production costs (3.5 Billion Won). Song mentioned that the directing ability of Jang Hoon drew him in while he was watching Jang's film "Rough Cut".

Song said, "Director Jang is very knowledgeable about popular movies. During the movie, Jang directed several excellent scenes. He seems to have his own special approach to the theme in a movie. I can confidently say the movie is a great movie, even though it is not the greatest masterpiece". The Korean movie industry still seems to be having a financially difficult time even though the percentage of the Korean movies in the market slightly increased this past year. However, Song does not seem to be concerned about the economic depression of film industry.

Song will up here in the noir movie "Night Fog", which will be directed by Lee Hyeon-seong, this spring. Song said, "The movie is a kind of noir movie. The final stage of the script for the movie is being written. There are no bedroom scenes (laughing). I really hoped I could work with director Lee if I had a chance. The movie 'Night Fog' seems would have a strongly-expressed melodramatic mood since the director, Lee, is a master of melodrama (laughing)". 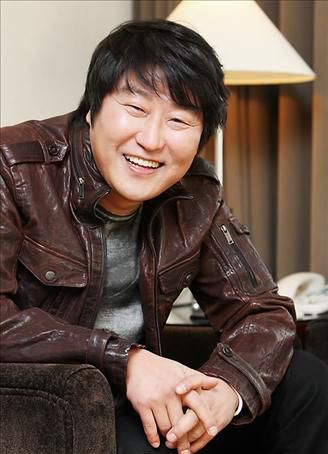 Some people mentioned Song might stick to working with those directors. Song replied, "Certainly, I have a very good relationships with the directors (laughing). However, I do not work with only the directors. Basically, I choose the films I will up here in based on the script. At the same time, the director is more important than the script. I usually decide to work on a film after I talk seriously with the director regarding the movie and understand the intention and plan of the director". When a reporter asked him if he would like to be a director, Song said, "I don't have any ability and any desires for it. I just want to devote myself to my acting".

In addition, Song said, "When I was in my thirties, I had power as a young man. The more I get older, the more I get wise through many experiences, but I seem to lose my energy. I think acting is not easy".

A reporter asked Song about his favorite dialogue in his movies and Song replied, "It is my favorite line even though is not mine. In the movie ‘Thirst‘, Kim Ok-vin says, ‘Death is the end'. The line has deep meaning. I would like to devote myself to my acting without regret when I die".

"Song Kang-ho's New Movie 'Secret Reunion'"
by HanCinema is licensed under a Creative Commons Attribution-Share Alike 3.0 Unported License.
Based on a work from this source