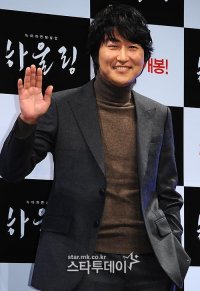 Song Kang-ho played an eccentric yet strangely charming gangster in "No. 3" (1997), when he gave a funny lecture to his underlings about how to beat up enemies: "A long time ago, there was a man named Choi Young-ui, and he staged a showdown with the entire world, you know. His style is like this. Just walking and walking. Then the enemy tries to - saying 'uh, uh' - block his move. Just then, he grabs the arm of the enemy. He asks, 'Is this your arm?' And he just keeps smashing down the enemy's arm. Until it breaks, you know".

Song's characterization was so dramatic and distinctive that his gesture and accent was repeatedly parodied and imitated on television shows. Song also became a famous star overnight, a feat for an actor who'd made a feature debut just one year before.

Fast forward 10 years: Song's stature is now far bigger than a mere Korean star. Just recently, he won the best actor award at the Asian Film Awards in Hong Kong for his role in "The Host". In the blockbuster horror-family-comedy film directed by Bong Joon-ho, Song played Gang-du, a slob who has yellow hair, runs a food stand and falls asleep at any time. Song's "No. 3" gangster character and Gang-du in "The Host" have three things in common. First, they are fairly dim-witted. Second, they are deeply charming despite their weaknesses. Third, the most important, is that Song has brought to life the peculiar characters with his talented versatility.

Expectations are mounting over whether he can pull off a commercial and cinematic success again in director Han Jae-rim's "The Show Must Go on". Song plays In-gu, a mid-level mob boss who struggles to save his career and family, apparently symbolizing many Korean fathers who battle to survive in a tough society.

In the latest film, Song's In-gu faces a series of problems. He has to kidnap and blackmail a company president to snatch a construction contract, but the scenario does not play out as he expects.

Meanwhile, he drives a big car as a mid-level mobster, but remains worried about lethal attacks from rivals. He feels he's getting old and his confidence in fighting knife-wielding enemies is fast declining.

In-gu's day job is always bordering on criminal acts and death threats, but his role as a father does not have many surprises. He has to take care of his family. His son is studying abroad, which means he has to secure the burdensome schooling expenses just like tens of thousands of lonely Korean fathers who have sent off their family members abroad in the name of getting a better education for their children.

In-gu is despised by his daughter who knows what her father is really up to. But In-gu tries to play the typical Korean father figure, to no avail. He ventures out to meet with the daughter's teacher for discussing her wayward behaviors, but ends up making the situation almost hopeless.

Just like any other Korean father, In-gu also wants to get a decent house for his family. He knows that his wife is having a hard time in the old apartment where taking a shower often means a soap-and-no-water adventure.

The crisis facing a middle-aged Korean father in "The Show Must Go on" involves a weakening status in the workplace, soaring education costs for children, an elusive dream to own a big house, and a marriage that is steadily breaking apart.

Whether the dramatic power of the movie is up to the ambitious English title is not certain. What's clear, however, is that regardless of the movie's commercial success, Song will certainly keep exploring his versatile talent.

"Song Kang-ho tests his versatility again"
by HanCinema is licensed under a Creative Commons Attribution-Share Alike 3.0 Unported License.
Based on a work from this source