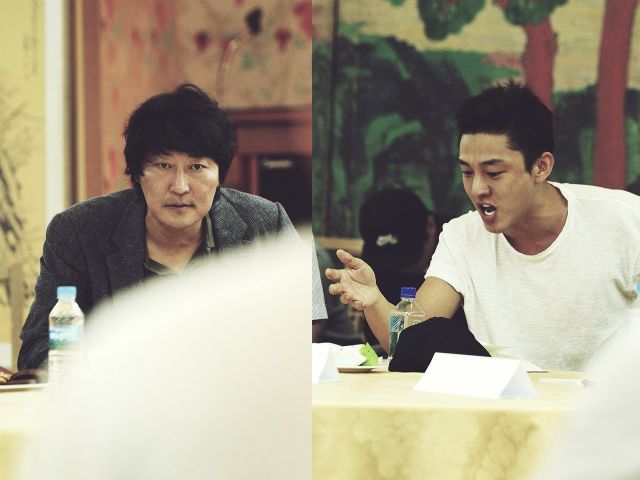 The movie "Sado" has cranked in. Song Kang-ho and Yoo Ah-in's movie is highly anticipated.

The first scene for "Sado" was taken on the 8th in Namwon. This scene involved Sado (Yoo Ah-in) impressing Yeongjo (Song Kang-ho) with his intelligence.

The script reading scene was released and the passion can be read through the photos. Song Kang-ho watched Yoo Ah-in who was passionate. The veins in his throat were throbbing.

Yoo Ah-in didn't keep the emotions bottled up in him. He said, "I've been looking forward to this ever since I read the script. It's inspiring".

Song Kang-ho hoped for a safe journey. ""Sado" got to me and I hope we all go through this safely".

Meanwhile, "Sado" is the story of Prince Sado who was killed by his father Yeongjo in a wooden chest. Other casts involve Moon Geun-young, Kim Hae-sook, Park Won-sang and more. The film will be released next year.

"Song Kang-ho VS Yoo Ah-in "Sado""
by HanCinema is licensed under a Creative Commons Attribution-Share Alike 3.0 Unported License.
Based on a work from this source