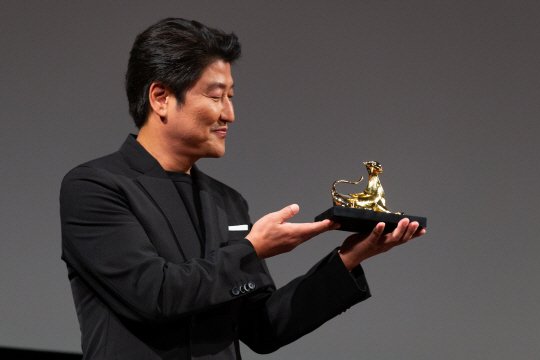 Song Kang-ho poses with the Excellence Award trophy at the Locarno Film Festival in Switzerland on Monday. /Yonhap

Actor Song Kang-ho received the Excellence Award at this year's Locarno Film Festival in Switzerland on Monday, becoming the first Asian actor to earn the honor.

The award is given to internationally acclaimed actors who have enriched the cinema with their work and talent.

In his acceptance speech, Song said, "Thank you. I'm happy and honored to receive this great and meaningful award at the prestigious, beautiful Locarno. I'm all the more grateful, as this is the place where many of the world's best actors that I have admired left their traces".

Song added, "When I recall my 30-year career as an actor, it has been truly an honor to have been able to work with great directors. I'd like to give my thanks and respect to Lee Chang-dong, Park Chan-wook and Kim Jee-woon".

Some of Song's hit films, including "Memories of Murder", "The Foul King", "Sympathy for Mr. Vengeance" and "Parasite", have been screened at the festival, which ends its 10-day run on Saturday.

"Song Kang-ho Wins Excellence Award at Locarno Film Festival"
by HanCinema is licensed under a Creative Commons Attribution-Share Alike 3.0 Unported License.
Based on a work from this source