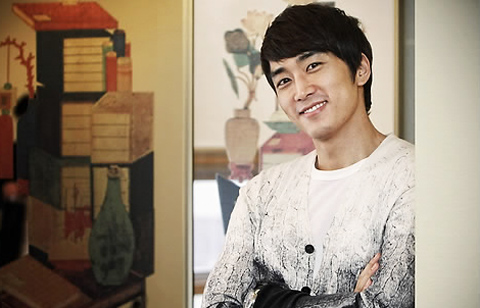 "I have to continue to strive to improve my acting ability". - Song Seung-heon

Actor Song Seung-heon is one of the so-called "Hot People" because he is a representative "pretty man" and Hallyu star, who is very popular in the Asian region. And he became a romantic actor with his appearance in the MBC TV drama "My Princess", which had finished airing on February 24, by playing an elite diplomat and heir of a chaebol named Park Hae Young. Song came to a restaurant located in Nonhyundong for an interview the very next day after the drama aired its last episode, and talked about many things regarding himself, now 16 years after his debut.

Q: Did you have a good sleep? I heard that you had a killer filming schedule for "My Princess".

A: On February 24 when the last episode aired, I filmed the drama until six in the evening and then we had a culminating party right away. Even though I did not drink a lot of alcohol, I was completely out of it, maybe because I was too tired. I heard that my manager had tried to wake me up in front of my house for almost one hour. But today I woke up early at seven in the morning. I could not get enough sleep for the last two months, so I could not sleep more in the morning. Since I could not watch the last episode yesterday due to the party, I just watched the last episode. 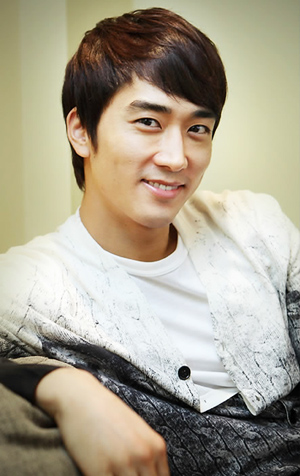 Q: How do you feel after finishing the drama? I guess that you might feel sad about missing many things.

A: Honestly, there were some moments when I had the thought, "I might not be able to finish this episode until the day it has to be aired". The filming schedule was so tight. I feel very happy that we could finish the drama without any problem. Of course, there are some things that I feel sorry about, but the drama itself and the character that I played were so exciting to me. I think that any experience could become my asset. 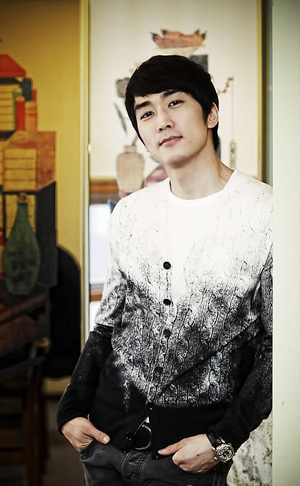 Q: Why did you choose the romantic comedy genre right now?

A: I had recently worked in "heavy" works such as the drama "East of Eden" and the movie "A Better Tomorrow". And when people around me had begun to tell me that they actually miss the "funny character" whom I played in my debut sitcom drama "Three Men Three Women", I had received the suggestion from "My Princess". I read the scripts for the first episode through the fourth episode, and they were so interesting. At that time, I did not know whether the script for the later episodes would come out this late (laugh). When I was younger, I wanted to be looked upon as impressive, and I tended to choose works which had lingering images rather than happy endings.

A: I have played characters who are always serious so far, so this character was so much fun. I felt like I was coming to the film set to play a game. Even though following the tight filming schedule was very difficult, the acting itself was very exciting. I had to play a character who has burdens in his life in the previous works, but this time I did not need to feel burdened about life and I felt really good about it (laugh). If I can have the chance, I want to appear in a romantic comedy movie again.

Q: You have not presented any love scenes that created goose bumps before. Did you actually fall in love with actress Kim Tae-hee?

A: If you think so, it might be because of our perfect acting ability (laugh). We filmed the drama very comfortably, and it was as enjoyable and exciting as if we were actually on a date. The behavior that the character Park Hae Young had shown when he made fun of her was so similar to mine, but actually I am a much more aggressive person, so sometimes I felt frustrated about Park Hae Young's passive behavior towards Kim Tae-hee. Park Hae Young hesitated to marry Lee Seol due to the allegation of tax evasion, but I could not agree with his hesitation. If his love were true, it might not become any problem. If I were him, I might suggest Lee Seol run away somewhere with me.

Q: It was so lucky that you could play this character that perfectly matches your image, but I felt so bad at the same time because if you acted in this genre when you were little more "pretty", I mean when you were in your twenties, it might be much better. Now you have already reached your mid-thirties. Do you think that you have become old?

A: Honestly, I do not feel that I am old. I was surprised when I heard that actor Lee Gi-kwang, who also appeared in the drama, was 22 years old, but I still feel like I am a high school student. It might because I still get along with high school friends, but actually we hang out in the same manner that we had done at that time (laugh). 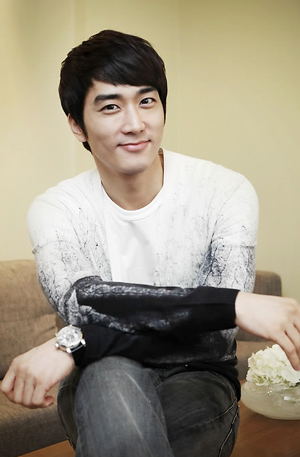 Q: Even though you could not feel any changes in your age, you might feel some differences. What kind of differences do you feel?

A: My attitude towards acting has been changed. After I finished my military duty, I came to have different thoughts. I feel more responsibility and I can feel excitement that I did not know before. I tended to act like a machine when I had a script in the past, but now I think about other things, like what I can do besides those lines written on the script. I have come to know the importance of harmony in the drama and I also consider viewers and think that I should make my fans enjoy watching my acting. I acted to satisfy my desire in the past, but now I want to find out some things that I can do for my fans with my acting. When I received a letter from a fan living abroad who said that she came to know Korea and like Korea because of me, I could realize the impact of Hallyu. I did not think about that impact when I acted, but actually there was some impact imparted from my acting, so I think that I have to also consider the impact of my acting, and those thoughts have become responsibility. In addition, I am very excited when I act. I want to act not only as my career, but also as an enjoyment to me, and I am actually enjoying myself while acting. People still say something about my acting ability and I have to give more effort to improve my acting ability. Anyway, now I am learning about the pleasure of acting.

Q: Why didn't you have a desire for acting in the past?

A: I had never thought about becoming an actor when I was young. I thought that being an actor was someone else's story who had been destined to become an actor. I was just an ordinary person and became an ordinary university student. In 1995 when I worked as a part timer, a person who introduced himself as a staff member of the Storm clothing company suggested I apply as a model in his company, and I applied and suddenly became the main model for the company. Actually a member of the group Deux, Kim Seong-jae, was the main model and So Ji-sub and I were supporting models. When the late Kim Seong-jae suddenly died, we unexpectedly became the main models. After that, I came to appear in the sitcom "Three Men Three Women" without any preparation. I could not even think about my desire at that moment because I could not prepare anything at all, so I was greatly criticized due to my bad acting ability. But now things have changed. Acting is something that I can do very well and that I have invested in for almost ten years up until now and something that I will do for my entire life. When I was in my twenties, I just thought that acting was my career and sometimes I was full of conceit, but now I have come to think of my fans and people first before myself. 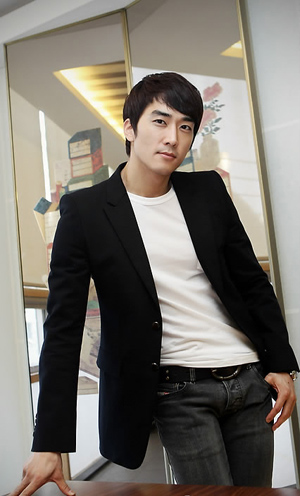 Q: Is there anything that you are afraid of? Do you feel afraid about losing popularity?

A: From the time when I began acting, I heard a lot that I should not focus on popularity, so I actually do not cling to popularity that much. Since I am a human being, gaining popularity might be much better than losing it. But I know very well that I cannot be a star actor forever. When I acted with senior actor Lee Soon-jae in "My Princess", I could see that he had huge enthusiasm about acting and his passion for acting looked so wonderful to me, and I came to have the thought that I wanted to become an actor like him. I also felt Ashamed about myself. When he was young, he was completely absorbed in studying acting, but I could not give endeavor for acting enough like him when I was young, because I did not study and I did not have the dream of becoming an actor, so I feel really sorry and regret it now.

Q: What do you usually do when you have free time?

A: I usually hang out with my friends or exercise. I play golf from time to time, but I am not good at it. My life seems to be very boring (laugh).

Q: Do you have any plans about marriage?

A: I want to form a good family, but it is not that easy. I do not have a girlfriend, either. I do not know... maybe my soul mate will suddenly appear. I would marry her.

At the end of the interview, he said, "Everything seems to be decided by relationships with others. In the past, I did not care at all about someone whom I did not like because I thought that the person had nothing to do with me, but now I want to have a good relationship with others anyhow".