Song Seung-heon and Liu Yifei, "I get greedy because of you" 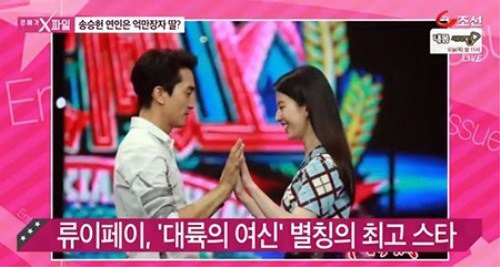 Song Seung-heon and Liu Yifei co-starred in a Chinese TV show on the 12th last month.

Song Seung-heon looked at Liu Yifei and said, "I am not a selfish man, but I get greedy when I see you".

The studio was filled with love in the air.

Song Seung-heon also presented flowers to his girlfriend and she was shy about it.

Meanwhile, Liu Yifei posted on her Chinese SNS, "I have a lot to say, but for now, here are two hearts".

"Song Seung-heon and Liu Yifei, "I get greedy because of you""
by HanCinema is licensed under a Creative Commons Attribution-Share Alike 3.0 Unported License.
Based on a work from this source