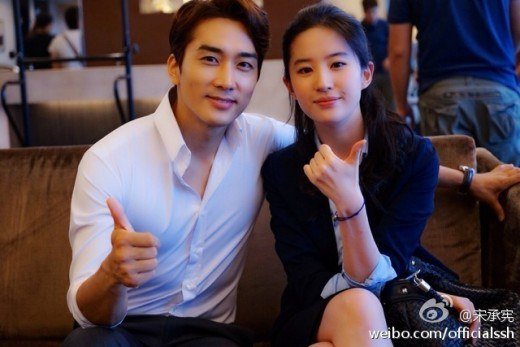 Song Seung-heon and Liu Yifei who have admitted to being in a relationship, are starring in a Chinese TV show together.

According to a Chinese media, Song Seung-heon and Liu Yifei arrived in Hunan, China on the 11th.

The two of them are starring in a TV show for promotional purposes of the movie "The Third Way of Love". Song Seung-heon's management agreed this was true and the making of the show will take place on the 12th.

The TV show they are starring in is a popular one for its many top stars and Hally star appearances.

Song Seung-heon and Liu Yifei's appearance in the TV show is their first official outing since their announcement. Many fans are looking forward to seeing the loving couple together and are hoping to hear some stories of their love and how it came to be.

They met on the movie "The Third Way of Love".

"Song Seung-heon and Liu Yifei to star in Chinese TV show"
by HanCinema is licensed under a Creative Commons Attribution-Share Alike 3.0 Unported License.
Based on a work from this source