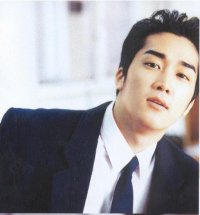 The Japanese Sankei Sports reported Tuesday that a local broadcaster has been receiving a barrage of applications to be a member of the studio audience for its interview with Korean actor Song Seung-heon.

When planning to hold the open interview with the leading Korean Wave star, Fuji TV decided to invite 100 of his fans to its studio. It began receiving applications from Nov. 27 through its website. "Until the deadline for applications, which was Dec. 4, some 200,000 people applied. This means 2,000 people are competing for one seat", the broadcaster said.

It will be the first visit to the island nation made by Song, who has been invited to the "Hot Fantasy Odaiba 2006-2007" hosted by Fuji TV. During the event, which begins on Dec. 9 and ends Jan. 3 next year, on display will be still images of Song as well as clothes and props from dramas where he appeared such as "Autumn in my Heart" and "Summer Scent. Song will stay in Japan from Dec. 12 until 14.

The Japanese sports daily said that the number of applicants is much greater than the number who applied to attend a talk show with kwon Sang-woo in 2004, for which some 100,000 people competed for 1,200 audience seats.

Fuji TV also said that it is surprised to see such a response. "We think that Song Seung-heon will become as popular as Japan's favorite son-in-law Bae Yong-joon", it said.

Meanwhile, Song's Japanese fan club established in July has drawn more than 10,000 members so far. Some 3,500 Japanese fans attended his fan meetings held in Seoul on Nov. 18 and 19 after he was discharged from military service.