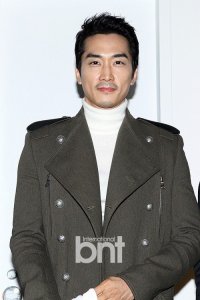 A Japanese management firm has offered hunky Korean actor Song Seung-heon a three-year contract worth 20 billion won. However, Song has reportedly passed the offer, saying that he needs to concentrate on his role as Dong-cheol in his latest TV work, "East of Eden".

Song's popularity and worth have soared ever since he starred in the spectacular new drama. Posting more than 25% rating, "The East of Eden" has emerged as another drama to lead the Korean Wave in Japan and Southeast Asia.

Song is already a huge star in Japan, having earned a wide following with "Autumn Tale (also known as "Autumn in my Heart" and "Autumn Story") and "Summer Scent". In fan meetings held after he was discharged from the, he drew 5,000 fans in Korea and 17,000 in Japan, demonstrating his drawing power as one of Asia's top stars.