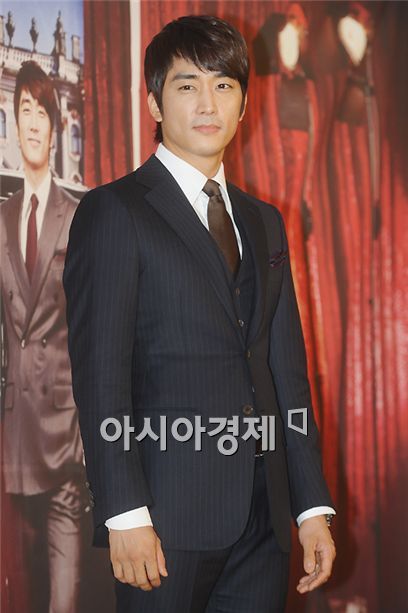 Actor Song Seung-heon poses during a photocall of a press conference for upcoming MBC TV series "My Princess" held at the Lotte Hotel in Seoul, South Korea on January 3, 2011. [Lee Ki-bum/Asia Economic Daily]

Korean actor Song Seung-heon says his character in "My Princess" is the most cheerful role he has played since making his acting debut in a sitcom 15 years ago.

Song made the remark on Monday during a press conference for MBC's "My Princess" as he explained to reporters on why he decided to take on a romantic comedy where he plays the role of Park Hae-young, a diplomat and son of a conglomerate who is full of himself yet sulks or gets angry easily.

"I haven't played such a cheerful role since 'Three Men and Three Women'", he said, referring to his past character in the popular MBC sitcom which ran for two and a half years from 1996.

In the sitcom, about three guys and girls living in the same dormitory in college, Song took on the role as the boyfriend to actress Lee Ui-jung who played the quirky female lead.

The show, which recorded viewership ratings in the 30 percent range, made household names out of the entire cast including the rest of Song's co-stars also composed of Shin Dong-yup, Hong Kyung-in and Woo Hee-jin.

After that, Song took on more tender and sentimental roles in mellow or sad dramas such as KBS' "Autumn in my Heart" (2000) and "Summer Scent" (2003).

Then when he was discharged from the military in November 2006, he opted for more aggressive and masculine roles as shown by his choices of movies "Fate" (2008) and 'A Better Tomorrow' (2010), and TV series 'East of Eden' (2009), but most recently had sought for less intensive roles.

"I had thought of playing a light and cheerful character and that's when I was handed "My Princess". I really wanted to do it and I felt that viewers will see me in a the same light since my role in 'Three Men and Three Women'".

"My Princess", helmed by the producer Kwon Seok-jang of the popular MBC TV series "Pasta", is about the love between a free-spirited female college student (played by Kim Tae-hee) and a self-made son of a conglomerate (played by Song).

The romantic comedy will air every Wednesday and Thursday night starting January 5.

"Song Seung-heon says "My Princess" character is most cheerful since 90s sitcom"
by HanCinema is licensed under a Creative Commons Attribution-Share Alike 3.0 Unported License.
Based on a work from this source